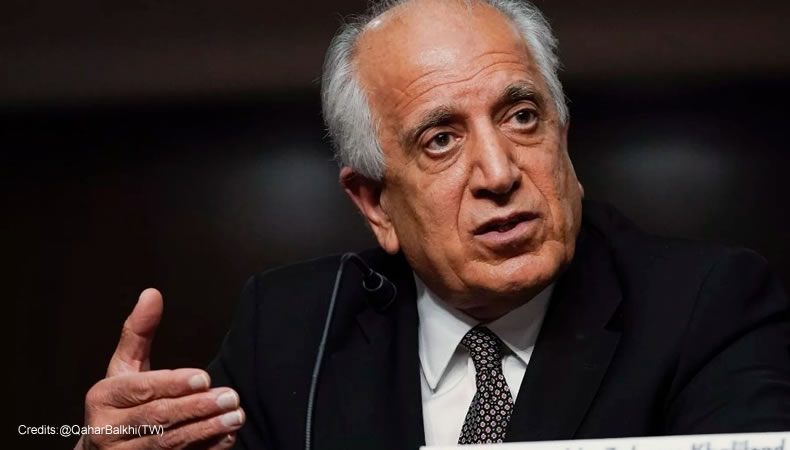 Afghanistan–The US State Department has officially announced the resignation of Zalmay Khalilzad, a special envoy for Afghanistan, first of Trump and then of Biden, the man who negotiated the February 29, 2020 agreement between Washington and the Taliban for the American withdrawal. Khalilzad had already been prime special envoy and US ambassador to Kabul in 2002-2005, a period in which he exerted a tremendous influence on the Afghan political scene.

In 2002-5 and 2018-2021, Khalilzad was heavily criticized for his leading role and interference in local politics. However, being of Afghan origin, Khalilzad has always easily managed to fit into the local political dynamics. In 2002-5, his influence was crucial in keeping the complex Afghan political scene under Washington’s control. Still, the question remains of how healthy it was for the Afghan state to have such a decisive role for the ambassador of a foreign power.

Indeed, today in Khalilzad, few admirers remain for his negotiating efforts, which began in September 2018. Among the Afghans, especially the supporters of the defunct Islamic Republic, Khalilzad has many enemies: not only among Ghani’s supporters, who have fought him since the first moment but also among the supporters of the political opposition to Ghani, the so-called ex mujahideen (Karzai, Abdullah and many others).

They had bet on Khalilzad and believed in his promises of an interim government, which would expel the hated Ghani from the political scene and pave the way for a compromise and a coalition government with the Taliban.

Instead, there is no trace of the compromise, and the coalition government and Khalizad himself, in announcing his resignation, implicitly mentioned this failure in his resignation letter as the cause of his abandonment. That was, in fact, Khalilzad’s plan in its broad outline. Having received the order to prepare the ground for an American withdrawal, he had set his solution on cooperation with Pakistan, which should have guaranteed an exit from Afghanistan with his head held high for Americans.

Of course, this choice could only work if Pakistan received substantial benefits in turn. From early exchanges with Pakistanis, Khalilzad accepted that a transitional or interim government was necessary to replace the Ghani administration and become an acceptable negotiating partner for the Taliban. There is no doubt that it was an ambitious plan, which could only have worked with a more muscular approach towards Ghani, who had no intention of making way for Khalilzad and his agenda.

Both the Trump and Biden administrations did not want to apply the necessary pressure on Ghani. Trump did not even take advantage of the hotly contested September 2019 presidential election golden opportunity when the extent of electoral fraud was evident. Refusing to recognize Ghani as the legitimate president and propose an interim government would probably have been possible at that point. In August, when the 14th Ghani agreed to transfer power to a provisional government, Khalilzad seemed on the verge of succeeding. Still, the illusion lasted only until the next day. Then, Ghani handed Kabul over to Haqqani, destroying any possibility of a transitional government and a coalition between the Taliban and the former mujahideen.

But if the Khalilzad era ends, what new diplomatic season is about to open? Diplomatic initiatives at the regional level are multiplying. The meeting in Moscow, which began yesterday, is the first formal occasion for the Taliban. Therefore, it can be read as the first step towards their diplomatic integration at the regional level, even if diplomatic recognition is unclear so far. Their delegation was introduced to the meeting as the “Taliban Movement.” India’s participation reinforces the sense of diplomatic progress for the Taliban, modest but real.

The main concern of the Russians and the other countries in the region is to avoid the collapse of the state in Afghanistan, which would complicate the situation enormously for them. In Russia, many believe that the chaos in Afghanistan is welcomed by the Americans and other actors currently far from Afghanistan.

The Russians tend to link the Islamic State offensive, the freezing of Afghan funds, and the suspension of international aid into one extensive conspiratorial framework. To avoid chaos, the countries of the region must roll up their sleeves. The most immediate problem, of course, is money, which nobody wants to get out. By now, Russia, China, Pakistan, and the others have resigned that the Afghan Central Bank funds lying in the US will not be released anytime soon. Therefore, alternative solutions are necessary given that, despite the seemingly relaxed attitude of the Taliban, the Afghan state is on the verge of collapse.

A direct transfer of funds would likely be limited. However, alternative measures could include trade facilitation, which would translate into higher revenues for the Emirate. In this sense, the Moscow conference could also usher in discussing the division of labor in providing financial support to encourage a joint effort.

For the Taliban, however, this is not all good news. The conference also clearly aims to increase pressure on the Taliban to make them more presentable. On paper, we still intend to talk about the formation of an “inclusive” government. At the same time, the Chinese seem to want to return to the office with their requests for more stringent measures by the Taliban regarding the presence of foreign jihadists. It is worth noting that before the start of the flooded meeting (10 participants), Russia, China, and Pakistan had a separate discussion. The absence of Iran in this particular meeting is striking. It suggests that Russia is now tending to move towards Pakistan and China when tensions between Pakistan and Iran are on the rise.

In this regard, the Russians have also remained much more silent than the Iranians regarding the failure to implement the various agreements negotiated by the Taliban in May-August with multiple figures and groups linked to Russia and Iran. The impression is that the Russians are more willing than the Iranians to settle for a more external, diplomatic role. At the same time, Pakistan consolidates its political influence and China the economic one.