The United States refuses a military escalation in Libya, calling for a ceasefire and for external parties to enter negotiations, following the announce of Egyptian president Abdel Fatah al-Sisi to be ready to launch an attack in the neighbouring country if the Government of National Accord (GNA) backed by Turkey will cross the red line of Sirte and al-Jufra.

“The United States strongly opposes military escalation in Libya, on all sides. We urge parties to commit to a ceasefire and resume negotiations immediately. We must build on progress made through the UN’s 5+5 talks, the Cairo Initiative, and the Berlin process.” The US National Security Council stated in a tweet Monday.

On Sunday, President Abdel Fattah Al-Sisi said that Egypt may resort to military intervention to protect its national security from other countries interference in the region, referring in particular to Turkey and its allies.

It must be said that on 6 June, in joint press conference with General Haftar and the president of Libyan Parliament Aguila Saleh, al-Sisi announced a peace initiative, also known as the Cairo Declaration, which aims at providing a solution to the conflict in Libya. It calls for a ceasefire in Libya, talks in Geneva, the election of a leadership council, the disbandment of militias, and the exit of all foreign fighters from the country.

The Egypt-led peace initiative adds to many others that have been launched over the past few years. So far, the GNA and its foreign sponsors refused any deal or peace agreement with the risk to transform the conflict in a war with global dimensions. 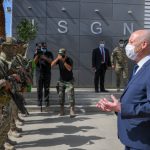 Israel launches airstrikes on Lebanon in…

Iran, which challenges await the new…