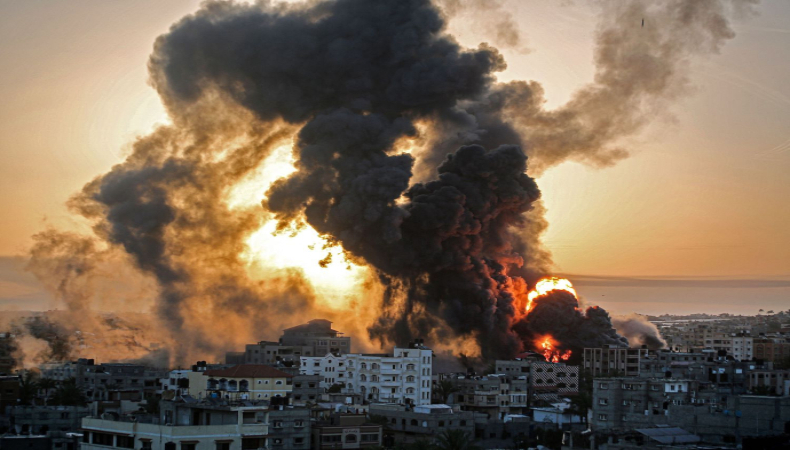 The truce in Palestine between Israel and Hamas come into effect

The military truce still seems to hold up but clashes took place in the early afternoon of today between the Israeli police and the Palestinians on the Temple Mount. The Jerusalem Post relaunches reports from the Palestinian media that the officers resorted to tear gas and shot rubber bullets. The news comes within hours of the truce that took effect at 2 am between Israel and Hamas, which controls the Gaza Strip, after 11 days of hostility.

From 2,00 am the fighting between Israel and Hamas ended following a ceasefire agreement brokered by Egypt and the United Nations. In southern Israel, life is gradually returning to normal and the military authorities are preparing to lift the emergency measures imposed on the population. According to the military radio, in addition to the suspension of hostilities, Israel has not made any other commitments. Last night Israel approved a ceasefire in Gaza.

The news was anticipated by the Israeli newspaper Yedioth Ahronoth. Throughout the day, rumors of a possible ceasefire in the conflict between Israel and the Gaza Strip had multiplied yesterday. In the afternoon, Hamas has confirmed that the ceasefire with Israel is “simultaneous and reciprocal”. Israel’s declaration of a ceasefire is “a victory for the Palestinian people”. This is what an official of the Palestinian militant group Hamas reports. Ali Barakah, a member of Hamas’ office for Arab and Islamic relations, told the Associated Press that the militants will remain on alert until they hear the mediators who have been working for days between Hamas and Israel.

Egypt will send two delegations to monitor the truce Egypt will send two delegations, one to Israel and one to the Palestinian Territories, to monitor the implementation of the ceasefire agreement reached this evening. This was reported by the Egyptian media, relaunched by the Israeli site Ynet. From the office of the Egyptian president, Abdel Fattah Al Sisi, he declared that “the next steps are aimed at maintaining stability”. With the cessation of the bombing, after 11 days, the flare-up of the most lethal conflict since that of 2014, which also involved Israel and the Gaza Strip, should stop. Based on estimates provided by the Ministry of Health of the Palestinian region, in this area, the victims of the air raids and the bombing of Tel Aviv were at least 232.

Twelve people were killed instead in the territory of Israel. According to Haaretz, Tel Aviv’s fighter missions have been hundreds. Over 4 thousand rockets exploded from Gaza in the direction of the south and center of Israel. The latest conflict broke out amid a political crisis in Israel when the prospect of the end of years of rule of Netanyahu, leader of the conservative Likud party, prime minister between 1996 and 1999, and then again starting from 2009 materialized.

The Israeli Defense Minister, Benny Gantz, praised the “unprecedented military successes” of the army (IDF) in the ‘Guardian of the Walls’ operation on the Gaza Strip. As reported by the Israeli media, Gantz praised “the unprecedented military successes in terms of power, precision and strategic importance in the fight against terrorist groups in the Gaza Strip”. The defense minister also warned that the army remains on high alert for further attacks from Gaza and warned that “the reality on the ground will determine the continuation of the operation”.

“Egypt guarantees the stop of rocket launches from Gaza after Israel announces the ceasefire,” said Egyptian security sources who conducted the mediation between Israelis and Palestinians to reach a truce. The indirect mediation between the parties took place through the Egyptian intelligence services and the UN envoy. According to the same sources, Egyptian mediators had direct contact with Hamas in the Strip. Tom Wennesland, the UN envoy for the Middle East, instead went to Doha in Qatar where important Hamas leaders in exile live, including Ismail Haniyeh. Palestine-Israel envoys accuse themselves of genocide at the UN During the meeting of the UN General Assembly, Palestinian Foreign Minister Riad Al Malki and the Israeli ambassador to the US and the UN, Gilad Erdan, accused their respective countries of “genocide”.

“The whole world is silent and turns a blind eye to the genocide of entire Palestinian families,” Palestinian Foreign Minister Riad Al-Malki told the UN. During his speech, the Israeli ambassador to the UN Headquarters Gilad Erdan withdrew. he stated that there was indifference to “the Hamas Charter, which like the Nazis is committed to the genocide of the Jewish people.

White House spokesman Jen Psaki, shortly before the announcement had stated that “Israel has the right to defend itself, but it has achieved significant military objectives in response to the rockets fired by Hamas, and now it is in a position to start cutting down on operations. “

US President Joe Biden had a telephone conversation with Abdel-Fatah al-Sisi to talk about the de-escalation of the tension between Israel and Hamas, a meeting that the Egyptian presidency reported. The American president and al Sisi have agreed to continue the talks and to coordinate in the coming days to ‘contain’ the situation. The role of the US “The Israeli government cannot afford to ignore US calls for a ceasefire in the Gaza Strip,” centrist leader – and de facto prime minister – Yair Lapid declared, explaining that the Jewish state will need of the Biden administration’s help in far more difficult matters.

The negotiation for the truce agreement with Hamas aims not only at a ceasefire but also at the return of the bodies of two soldiers of the Israeli army, killed in Gaza in the 2014 conflict, Hadar Goldin and Oron Shaul, and also of two Israeli citizens who have long been held captive in the Gaza Strip. A “qualified source” from Israel told the New York Times. The agreement also provides for a halt to Israeli attacks on Hamas’s infrastructure and an end to Israel’s targeted attacks against “terrorists”, the leaders of the Palestinian militias. According to the Times, the Jewish state is also asking Hamas to stop the excavation of the tunnels and the protests along the border with Gaza. Israel Electric Corporation employees also said they will not repair power lines damaged by Israeli attacks in Gaza until Hamas returns the bodies of the two soldiers.

How Erdogan is challenging Europe