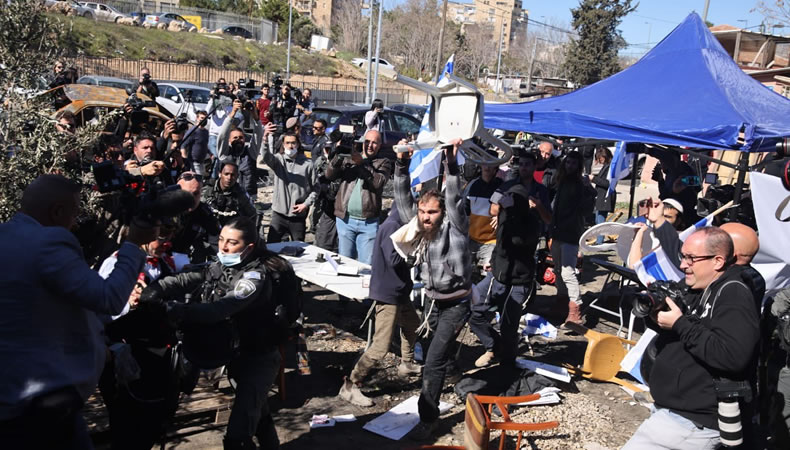 Palestine–Settler violence has erupted in the East Jerusalem neighborhood after a far-right Knesset member takes up residence on Palestinian family land. According to a Middle East Eye journalist, Israeli settlers attacked occupied East Jerusalem’s Sheikh Jarrah neighborhood on Sunday morning, ahead of the reopening of a far-right Knesset member’s office on land owned by a Palestinian family.

Hundreds of settlers pitched a tent on the land of the Salem family, who are facing deportation, and battled with residents and supporters, wounding 73-year-old owner Fatima Salem. Settlers fought locals and used pepper spray, as both sides threw chairs, until Israeli police intervened to force Palestinian protesters back.

Itamar Ben-Gvir, a lawmaker, joined the settlers in the tent, reopening his office and stating that they are “the landlords.” Ben-Gvir is the leader of the Jewish Power party, which is a member of the Religious Zionism political coalition, which advocates for the displacement of Palestinians from their homes and the administration of Israel in accordance with Torah teachings. On Saturday, he declared his plan to reestablish his office in Sheikh Jarrah, on property stolen by settlement groups last month from the Salem family.

Following the announcement, hundreds Israeli settlers descended on the area just after midnight, throwing stones at Palestinian homes and causing damage to automobiles. Settlers then stormed the Salem family’s home, spraying women and children with pepper spray, according to residents who spoke to the Anadolu agency. “They pepper-sprayed me and my neighbor Abu Mohammad out of nowhere. I couldn’t open my eyes because they were burning. I couldn’t take a breath, “Fatima Salem expressed her thoughts.

The Salem family has been contesting settler claims to their land in court for decades. Fatima Salem was forced to leave the house by an Israeli court in 1987, claiming she couldn’t show she had lived there before her parents died. Salem claims to have been born and raised in the residence. Her son and daughter, as well as their families, currently live in the house.

The court ruling is based on a claim made by the Israeli group Nahalat Shimon, which has been active in obtaining eviction orders against Palestinian households in Jerusalem. Sheikh Jarrah’s Hebrew name is Nahalat Shimon. Settlers claim the homes belong to Jewish family that resided in the region before to 1917. In the same year, the 1987 ruling was put on hold, but the issue was reopened in 2015. The family received a final eviction notice in December 2021.

Israeli settlers escorted by police seized a block of property held by the Salems close to their home on January 21. The Salems were given until March 1st to evacuate the residence, according to police. In Sheikh Jarrah, 37 Palestinian families dwell, with six of them fearing displacement. 13 Palestinian households in Sheikh Jarrah have been evicted by Israeli courts since 2020. Last year, the location became a focal site for protests and sit-in solidarity actions, attracting Palestinian and anti-occupation Israeli activists as well as foreign activists.

Bahrain: Bennett meets with Jewish Community in First-Ever visit by Israeli PM to the Country