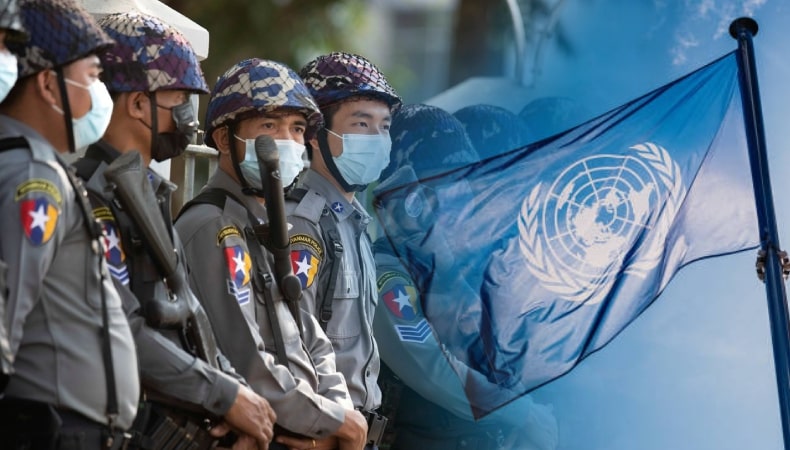 A rare call has come from the United Nations following violent military coup in Myanmar this year. The UN has called for halting arms sale to the Myanmar military. The UN General Assembly has adopted a resolution that condemns Myanmar’s military junta that in February overthrew country’s elected government.

In the resolution, UNGA has called for release of all political detainees, including elected leader Aung San Suu Kyi and putting an end to violence, bloodshed and humanitarian abuse against the protesters and media personnel. The resolution, however not legal, holds an important political standing. Resolution by General Assembly has got support of 119 countries, while Belarus was the only country to have voted against it. 36 other nations abstained from the voting, including Russia and China which are also largest arms supplier to Myanmar military.

UN special envoy on Myanmar, Christine Schraner Burgener, told the General Assembly, “The risk of a large-scale civil war is real. Time is of the essence. The opportunity to reverse the military takeover is narrowing.”

The abstainers from voting had different views on resolution. While some nations said that ongoing crisis is Myanmar’s internal issue, some said that UN did not address military brutality against Rohingya Muslim population four years ago that led to millions displaced.

EU’s UN ambassador, Olof Skoog, said the General Assembly resolution “delegitimises the military junta, condemns its abuse and violence against its own people, and demonstrates its isolation in the eyes of the world”.

Myanmar’s UN ambassador Kyaw Moe Tun, who also represents Myanmar’s elected civilian government, expressed his disappointment over the long period of time that it took for the General Assembly to pass what he labeled a “watered down” resolution.

Human Rights Watch had urged the UN General Assembly last month to pass resolution calling for arms embargo. The group said, “Governments should recognise that arms sold to Myanmar’s military will likely be used to commit abuses against the population. Arms embargoes can help prevent such crimes.”

Muslim Brotherhood, how Islamists insinuate in the West