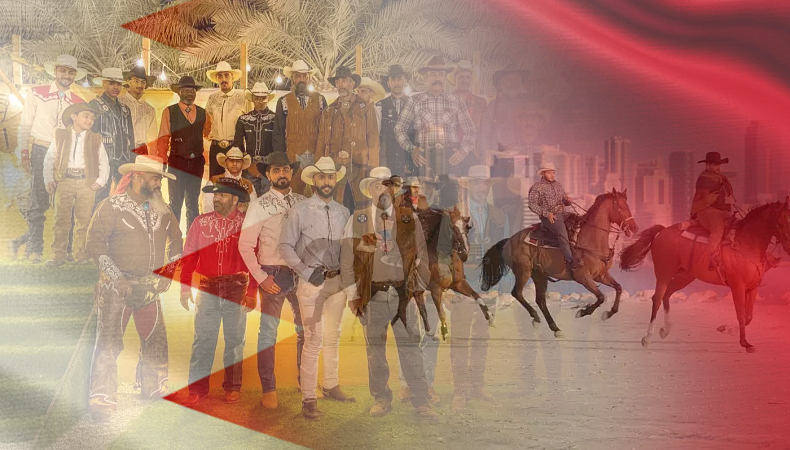 Bahrain– The sound of galloping hooves, snapping whips, and “yeehaw” reverberates over the terrain as the sun sets over a desert wilderness. These images conjure up images of the American Midwest, not Bahrain’s Kingdom.

Since ancient times, the island nation in the Arabian Gulf has been known for its pearl divers and fisherman. In leather spurred boots and tasselled waistcoats, a gang of cowboy fans shares family legends.

The club is a part of an expanding community of Bahraini men who all have a passion for and fascination with the American West. The group gets together frequently to practise horseback riding, cook authentic cowboy fare, and trade clothes.

This unusual sport first emerged in the 1970s, when dads taught their sons the techniques and information they had acquired. “The previous generations who began participating in this sport gave us the notion. As the middle generation that followed them, we continued this sport in their footsteps “Fareed Madan, a cowboy from Bahrain, tells Scenes. He continues, “This sport has survived from the previous generation to the current age and, hopefully, will survive to the next.”

American cowboys are renowned throughout the world for their unique look and hardy way of life. They have been the subject of numerous motion pictures and television programmes. “I like watching western movies, especially cowboy flicks, and Clint Eastwood is my favourite actor. The Good, the Bad, and the Ugly is one of my favourite movies. Fareed claims, “We are imitating these personalities and attempting to act like them.

Numerous places supply the cowboy attire for the Bahrain enthusiasts. They had previously ordered goods from American merchants directly online. They may now buy goods from a local Bahraini business that specialises in cowboy memorabilia.

“We feel eminent among people when we wear this attire. The sensation cannot be described. If you are passionate about this activity, you will be genuinely excited to participate in it and display your inner tough and strong person,” Cowboy Mahmoud Al Kaffas says.

There are more than 300 cowboys in Bahrain. Each cowboy is a part of a stable that includes 20 to 30 other cowboys. Cowboy Fadhel Abbas Al Jabal adds, “I would like to open my own stable to teach those who might wish to join and educate people about it.

The close-knit community comes together on weekends throughout the cooler months to participate in festivals, camping excursions, and reining. “Similar to other equestrian sports, cowboy sports entail dangers and necessitate learning the fundamentals of horseback riding. Being able to grip the reins with one hand is one of the things you should be aware of before participating in this activity “cowboy Ali Abdullah adds.

The manoeuvres required to work cattle on a ranch are the basis for the equestrian sport of reining. Through a precise pattern of loops, spins, and stops, the riders direct their horses.

“In some contests, like the barrel race, both the horse and rider must be physically fit. To get the greatest grades in this section, you must move quickly and carefully avoid making mistakes “Fareed clarifies. “You fall down the ranks the more errors you commit and the longer it takes. You will outperform the competition if you complete the work more quickly and with fewer errors.”

There are also competitions for the most attractive horse, attire, and saddle. “When you don this attire to compete, you truly feel like a warrior engaged in battle. You desire to stand out in the crowd. You don’t want to dress up and participate if it’s not necessary. To succeed in your endeavours, you must be a fighter “As Fareed says.

Being recognised as an official sport

The tournaments and prizes are currently funded by sponsors and the members themselves. The club is hoping that cowboy events will be recognised as a legitimate sport by the Bahrain Royal Equestrian and Endurance Federation.

“I hope our group expands and has more members in the future. Having a track would also allow us to practise our passion and receive greater support for it. Instead of an association, we would prefer to have a union similar to the Equestrian Federation “Fareed says. “This sport will expand much further with official support.”

The spirit of the brotherhood

The cowboy culture’s spirit is essential for luring new members. The popularity of the subculture has increased recently. “Without the assistance of the boys, I am powerless. We support one another in anything we do because we are very close,” says Ali. “The biggest gift and inspiration for me to keep doing what I love is being with a bunch of positive and motivating brothers,” he adds.