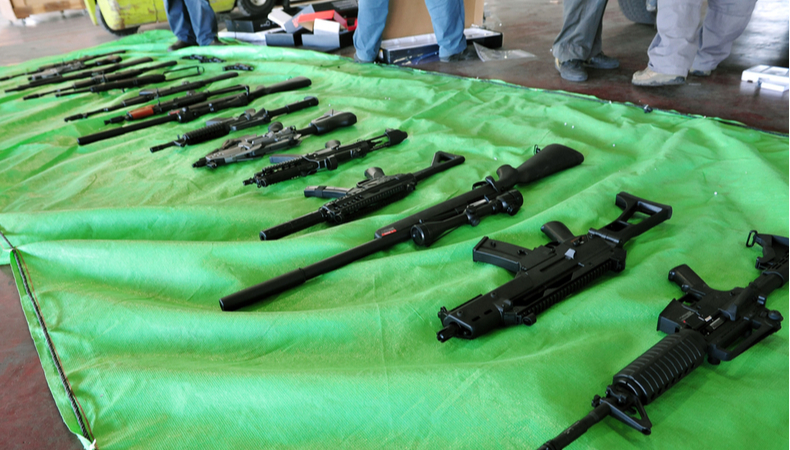 Israel–In what they called the “largest operation in the country’s history,” Israeli police arrested 78 of the most significant illegal arms traffickers operating in Israel tonight, seizing a large number of smuggled weapons. An undercover operation lasted over a year and culminated in a night raid involving 1,600 agents in 25 Arab communities in the center and north of the country and East Jerusalem.

The undercover agent – codenamed “Ocean” after the character in the film series of the same name with George Clooney – is a repentant ex-criminal. He acted as a mediator on behalf of a trafficking organization that supplies the great leaders of the local underworld.

Among the weapons seized – partly purchased by the undercover agent for about 4 million nis (over 1 million euros) – two Mag machine guns and two explosive devices with a ready-to-use cellular operating system and dozens of M rifles -16 and AK-47 and pistols. There were also two minors – 13 and 17 years old – and a combat soldier from the Golani unit and a former soldier. The wave of arrests will continue tightly, police said.

Now “Ocean,” who, according to Channel 12, had offered his cooperation during a period of detention, will be transferred to the Interior Ministry’s witness protection program.

According to the police spokesman, most of the weapons came from the West Bank, which arrived by land smuggling from Lebanon and Jordan and was partly stolen from the military bases of the Israeli army. The number of illegal weapons in the country is estimated at around 400,000 units, a bottomless pit from which the crime ravaging Arab society in Israel in recent years has drawn. In 2020 alone, 110 victims were registered among Arab citizens: a challenge that has become the current government’s priority, which sees for the first time the joining of an Arab party in the coalition (Mansour Abbas’ Ra’am) has its electoral promise against the phenomenon.

The opposition Arab parties also welcomed the operation. “It is proof that the police can act effectively in Arab society even without using undemocratic intelligence tools,” said Ayman Odeh, leader of the United Arab League. As part of the national plan to combat crime in Arab society for which the government has allocated an unprecedented sum of 10 billion nis (about 4 million euros) – on whether to involve the Shin Bet (the intelligence that operates only in the Palestinian Territories) in identifying criminals even among Israeli citizens.

A move that sees both the government and public opinion divided. Emblematic is the position of the progressive left Meretz. He opposes the measure, while the Minister for Regional Cooperation Issawi Frej who strongly supports her: “For me, let the CIA intervene if it serves to protect citizens,” said Frej, who lives in Kfar Qassem, one of the Arab towns hit by the spiral of violence and settling of scores between gangs. “Congratulations to the police,” Frej tweeted today. “We must continue to work with resolve and coordination to eradicate the scourge of crime.”

After almost two months, the police arrested the alleged perpetrators of an intimidating shooting against Jamal Hakroush, the first Muslim superintendent of the Israeli police, appointed by the previous government to lead the task force to fight crime in Arab society. Hakroush was allegedly targeted by a lawyer who did not appreciate his attempt to mediate a “sulh,” a conciliation according to Islamic tribal tradition. 80% of crimes in Arab society in Israel are not solved due to reluctance to collaborate with institutions in which the level of trust is shallow. In the general perception, a drastic change in relations between the prominent minority in Israel (21% of the population) and the institutions could occur due to the results collected by Ra’am – the ruling Arab party – during the term.

International Community has to impose sanctions on Libya elections spoilers!