According to the Turkish Pulse 2020 study conducted by the local sociological company Metropoll, the level of approval of the country’s president and leader of the ruling Justice and Development Party  Recep Tayyip Erdogan among Turkish citizens fell to 41.9%.  Thus, this figure reached the minimum recorded since October 2018, Turkish media noted.

In October 2019, when Erdogan ordered the offensive in northeast Syria as part of an “anti-terrorist operation” called “Source of Peace” against the Kurdish “People’s Self-Defense Forces”, the rating of the permanent leader of the Turkish state (at the helm of power since the end of 2002  ) recorded a significant increase – up to 48%.

Among other things, the current  Metropoll poll showed that 62.2% of voters in the Nationalist Movement Party, led by Devlet Bahceli, an internal political ally of Erdogan and his parry, approve of the country’s president.

Erdogan’s anti-rating among supporters of the main opposition Republican People’s Party (RPP), meanwhile, reached a record 87.4%.  Among the voters of yet another opposition political association, the Good Party, it is 83.3%.

Recall that last year, the Justice and Development Party candidates were defeated in the municipal elections in the two largest cities of the country – Istanbul and Ankara.  RPP nominees became mayors in both megacities.To read more about Arab News Latest, Arab Politics News. 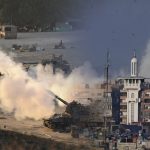