Has The Somalian President Compromised or Defeated at the Mogadishu Talks?

Sunday, 20 Sept 2020. Somali President Mohamed Abdullahi Farmajo said he had made many concessions during a meeting with state leaders to avoid a split. Farmajo said that the leaders of the regional administrations in the country have sidelined and opposed some of the issues that he was adamant about, including holding elections in the country, and he has repeatedly said that it will take place.

Prof. Amir Sheikh Yahya mostly about the economy and politics, said that no compromise was made president in the Cabinet but defeat. He said President Farmajo had sidelined all regional administrations, including those he trusted, and pointed out that a compromise was something you could afford when you left but not something that compelled you to do so.

“Compromise is something you have the power to ignore, but if all the regional administrations have sided with it, that is not a compromise but a reality. Everyone knew that there could be no elections in this country,” he said. Yahye Aamir.Yahye Amir also said that the convening of the conference in Mogadishu and the agreement reached came under pressure from the international community, and noted that there was nothing wrong with sitting down and being invited.

Although the members opposition parties welcomed the president’s compromise, Abdirahman A. Shakur, the chairman of Wadajir party said: “If the president is serious he must implement the agreements he has made by the leaders of the regional states and the opposition parties and must be serious of reforming the Security Council, which has become a political body, the fight against terrorism has failed. He is accustomed to meddling in politics, and the media and politicians are reluctant to do so.

The president of Somalia and the leaders of the regional administrations have repeatedly said that they have not talked to each other and reached an agreement, but it is noteworthy that the international community has always pushed back the leaders who met and put pressure on them.Farmajo, who is a stumbling block to a lasting agreement, appears to have been overpowered by the state leaders in the conference.

Libya: after Serraj, what next?

Beirut, Lebanese mother throws her dead son into the water escaping from the sea 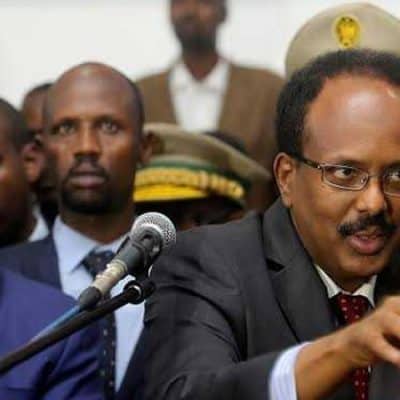 Somalia: African Intelligence Journal has revealed the Turkish-backed candidate in the Upcoming Election.

Who Does Villa Somalia Want as a President of The Hirshabele Administration?