Saied also said that people who planned virtual sessions were trying to sow chaos in the parliament. The assembly’s speaker, Rached Ghannouchi, head of the Islamist-inspired Ennahdha party, called for a plenary session on Wednesday. Speaking ahead of the meeting, Saied said, “What happened today, the so-called ‘virtual meeting’ is illegal, because the Assembly and its bureau are frozen.”

Tunisia’s UGTT trade union also criticised parliament’s planned meetings. Spokesman Sami Tahri said that such a decision can drag Tunisia into conflict. Reportedly, the Bureau of the Assembly of People’s Representatives decided to hold the plenary session to discuss Saied’s “exceptional measures” imposed in July. The Bureau also includes the Speaker of Parliament and representatives of all parties with seats.

Reportedly, the MPs also decided to hold another plenary session on Saturday to discuss Tunisia’s deteriorating economic situation. In February, Saied announced that he will remake Tunisian politics in 2022 with a new constitution and parliament. However, the threat of national bankruptcy ruined his plans.

The country is suffering from political and economic crises. The political crisis deepened when last July Saied sacked the government and suspended the assembly. Subsequently, his opponents labelled the moves a “coup” against democracy. Since then, the parliament building has been closed by security forces.

Saied’s sacking of the government and freezing parliament was not welcomed by citizens and opposition parties. At that time, opposition parties protested against the suspension of parliament by Saied. His decision to suspend the parliament also sparked large demonstrations both for and against him. Reportedly, political parties and civil society groups continue to reject Kais Saied’s “monopoly of power” in the country. They demand their right to decide Tunisia’s future amid a worsening socio-economic situation.

In a mass shooting in central Israel, a gunman murders five people 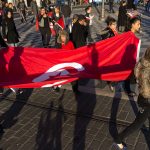 In Tunisia, anger against unpunished police violence is growing