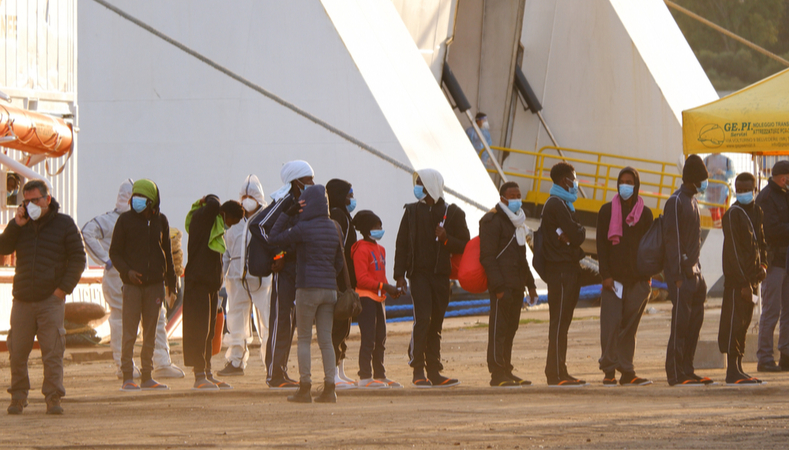 Turkey uses immigration with the EU to grab Libyan ports

Turkey could negotiate an agreement with the EU that recognizes its military and commercial presence in Libya as a fact. In exchange, an adviser to Turkish President Recep Tayyip Erdogan has proposed, Ankara could offer its help in controlling migratory flows in the Mediterranean. ’Is a singular background that demonstrates how the Turks have already carried out rescue operations for migrants off the coast of Libya in the past. In January 2020, an Ankara Navy frigate, Gaziantep, intercepted one of the many boats attempting to reach Italy.

The military recovered the castaways and gave them first aid. Finally, they brought them back to Tripoli. It was the Ankara Ministry of Defense itself that gave media coverage to the rescue, publishing photos and videos of the operation on its website. The illegal push-back – for the UN, Libya is an unsafe place – was aggravated by the fact that it was carried out by a military ship from a NATO country. But this was not the only violation by the Turks. Gaziantep was so close to Tripoli because she was escorting a freighter that sailed from Mersin, in southern Turkey, loaded with weapons bound for the Tripoli government supported by Erdogan and the international community. Also on May 2, Gaziantep assisted the Libyan Coast Guard by rescuing another 123 migrants, 80 miles off the coast of Tripoli.

With the passing of the months, the Turks have now put the West in front of a fait accompli: the almost permanent presence of their frigates in the port of Misrata. “For Erdogan, the city-state of western Libya is the gateway to Africa,” analyst Mohamed Eljarh told Il Foglio. Last summer news of an agreement reached with the then government of Tripoli to give the Turkish port of Misrata under concession for the next 99 years was relaunched. “In reality, this contract has not yet been formalized and there has been no signature. At least, not yet. It is a fact, however, that there are plans and negotiations underway to make the city a logistics hub for Turkey,” says Elijah.

For some months the Albayrak Group, a large Turkish company that has already concluded similar agreements in Somalia and Guinea, has been seeking an agreement with the authorities of Misrata for the concession of the port, but also the strengthening of the city’s international airport. Erdogan’s goal does not stop with Libya – towards which Turkish exports have already grown by over 220 percent in the last two months alone – but goes to the trade routes of the Sahel and sub-Saharan Africa.

To do this, however, the Turkish president needs an agreement with Europe, even using the immigration card. For about a year, Ankara has increased its efforts in training the Libyan coastguard, to the point of competing with the support offered by Italy, which is directly interested in controlling migratory flows in the central Mediterranean and the main sponsor of the Libyan coastguards. “It almost seems that the Turks want to control the migrants’ taps on a double front – a diplomat based in Tripoli speculates to the Sheet – As they did along the Balkan route, they are also trying to do the same in Libya”.

On Tuesday, Mesut Hakki Casin, a foreign policy and security adviser to Erdogan, in a brief interview with Radio France International said that in exchange for his help in the fight against human traffickers, Europe could recognize, whether officially or not, the Turkish military presence in Libya. “If Turkey hadn’t sent the military, we would have seen a huge conflict. How could we withdraw today? It would only be possible if the others did it too,” said Casin, who bets on one point: the Russian rivals will never withdraw their mercenaries from Libya and consequently the Turks will certainly not take the first step.

Thus, Erdogan’s adviser puts forward a proposal: to find an agreement with the EU and put it in front of another fait accompli, a kind of indecent proposal: “We didn’t want to expand our military presence in Libya, we didn’t need it. But now both Turkey and the EU could work together. We aim to support Frontex, the European agency for the security of the external borders “. A similar hypothesis would also find the support of some European countries, concludes Casin: “Not only us, but also Italy and Malta” would be in favor.