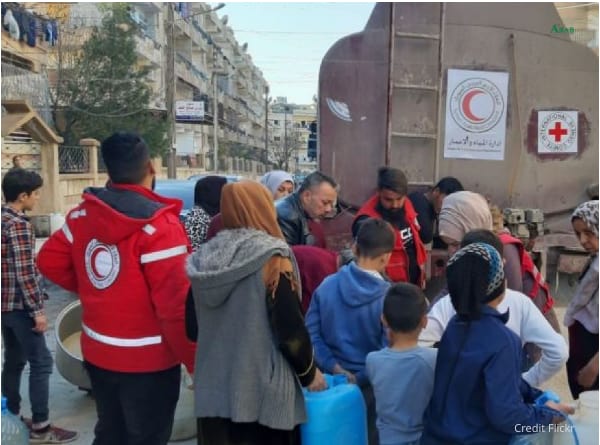 Water cutting the turkish punishment on Al-Hasakah in Syria

Pro-Ankara factions continue to cut water on the Kurdish-controlled Hasaka province and its countryside in northeastern Syria.

According  to the joint water directorate in Hasaka, Suzdar Ahmed, the hardline factions stopped pumping water from the Aluk water station to the city and its countryside.

Turkey got involved in the thirst of more than a million and a half million Syrians living in Hasaka and its countryside in an attempt to pressure the Kurdish self-administration and escalate the state of protest and congestion.

According to Suzdar Ahmed, Turkey is blackmailing people through the armed factions that cut off water by controlling the Aluk water station.

The joint water directorate in Hasaka said that the self-administration declared a state of emergency after imposing a curfew and preventing the gathering of people to obtain water, stressing that the tanks will provide water to the camps and neighborhoods in an emergency so that alternatives are used to face the shortage of drinking water.

This is not the first time that pro-Ankara factions have cut water on Al-Hasakah, as these factions were involved in such abuses in February, when the water was pumped back.

Turkish violations have evolved since its occupation of large areas in northern Syria, especially the Kurdish areas, after its implementation of the October invasion that drew wide international and regional criticism.

Turkey says it will secure the occupied areas residents’ needs, but according to several sources, it has used its pro-Syrian militia to tamper with these areas amid information about reprisals and looting of property, both during the aggression that began in October and stopped by US mediation on the 23rd of the same month.

Turkey is responsible for any crimes committed in the areas under its control, whether committed by its soldiers or it’s militias. It is also assumed that the consequences of sabotage and destruction to basic services facilities as a result of its aggression on northeastern Syria, including the power lines responsible for feeding the Abar Aluk project, will be borne by them.

Ankara was able to invade these areas, after it was given a green light by the United States of America, which is still keeping soldiers in this oil region.

And with the Kurds resorting to an agreement with Moscow and the Syrian regime, the Russian army patrolled the areas, causing some kind of friction with the Russian patrols, as the SDF seeks to deal with the two sides in an attempt to preserve their interests.

In Iran, methanol is widely consumed to protect against coronavirus. About 300 people died

UAE providing medical aid, supplies and other support to nations amid corona crisis