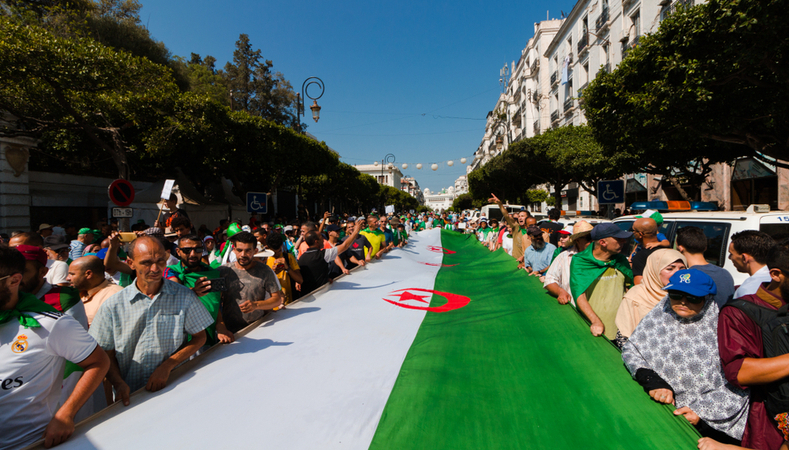 Algeria continues repressive campaign, accreditation to France 24 has been revoked

In the months leading up to the parliamentary elections of 12 June, the Algerian authorities launched an intense repressive campaign that led to at least 273 activists, mostly belonging to the “Hirak” civil society movement, whose “crime” is it was only that they wanted to exercise their rights to freedom of expression and demonstration.According to Amnesty International, at least 17 activists have been accused of “terrorism”, a charge used increasingly in the last three months along with that of “conspiracy against the state”. These include lawyer Abderraouf Arslan and human rights defenders Kaddour Chouicha (pictured), Jamila Loukil, and Said Boudoir.

On June 8, the Criminal Code was amended to expand the already vague definition of “terrorism,” which now includes the attempt to take power or to change the system of government through unconstitutional methods, an equally generic concept that could lead to the criminalization of all forms of dissent and the outlawing of “Hirak”.Already, on 30th May, the High Council of the Judiciary, an administrative body chaired by the president of the republic, had sacked judge Saledin Merzoug, guilty of having expressed opinions in support of democracy and “Hirak.”

As if that were not enough, the Interior Ministry has called for the suspension or dissolution of two political parties, the Union for Change and Progress and the Socialist Workers’ Party, and the dissolution of a civil society youth organization.

Algeria has decided to withdraw the accreditation from “France 24” channel due to its “overt and repeated hostility”, after warning the international news channel last March for its coverage of the popular protest movement of the ” Hirak “and its marches every Friday. The Algerian Ministry of Communication announced last week. The withdrawal of accreditation is also motivated by “non-compliance with the rules of professional ethics, disinformation, and manipulation as well as a proven aggression towards Algeria,” added the Minister of Communications and government spokesman Ammar Belhimer, quoted by the State news agency.

A decision that comes in the aftermath of the early legislative elections marked by a high rate of abstention. France 24 did not immediately respond to Algeria’s announcement but last March, its director Marc Saikali defended the network saying that the channel was only doing its journalistic job, respecting the rules in force.

The French government, which has rather strained ties to Algiers, did not immediately comment on France 24’s withdrawal of accreditation. Both foreign and local journalists in Algeria often face bureaucratic and unclear procedures to obtain permission to work. Reporters Without Borders (RSF) ranked Algeria 146 out of 180 countries and territories in its World Press Freedom Index 2020, a drop of 27 since 2015. France 24’s withdrawal of accreditation came the day after the country North African held legislative elections, with nearly 70 percent of voters abstaining, according to official data.

It also comes amid growing official pressure against the Hirak and a series of arrests of journalists and opposition figures. Although former Algerian president Abdelaziz Bouteflika resigned in 2019 in the face of anti-regime protests, protests continued, calling for a review of the government system in place since independence from France in 1962. Algerian authorities say that the main demands of the movement have been met, and they accuse the protesters of working against the interests of Algeria.

BBC pleas UNHRC over its Persian staff harassment by Iran