France must reconsider its foreign policy for Middle East

Once a crucial player in the Middle East, France is witnessing a diminishing role in the region, particularly after its foreign policy failures in Libya, Egypt, and Algeria among other nations. The Arab Springs of 2011 serves as a turning point for France’s foreign policy in the Middle East as it highlighted some of the inconsistencies in Paris’ political strategies in the region. As the regimes in Egypt, Tunisia and other countries started changing, France started losing its influence in the region compared to its European counterparts.

As a result, France scrambled its actions to the changing dynamics in the region in a bid to regain its position as a dominant European military power. For instance, Paris initiated a NATO-led offensive in Libya against Muammar Gaddafi’s forces in support of the 2011 revolution. In addition, French authorities have given unprecedented political and military support to the Abdel Fattah Al Sisi regime in Egypt since 2013.With all these efforts, France is seeking to foster a stable relation by reassuring its Middle Eastern partners. In the aftermath of the Beirut port blast, French President Emmanuel Macron visited crisis-hit Lebanon and assisted in the formation of a new cabinet.

However, there have been times when the unpredictable regional dynamics of the region failed France in gaining the influence it aimed for. Recently, calls for boycotting French products grew stronger in the Arab world and other countries after President Macron vowed to “not give up cartoons”. This development came in the backdrop of an October 17 killing of a French teacher outside his school, what Macron called an “Islamist terrorist attack.”

Amid prevailing threats, the French government launched a rapid and rough crackdown on radical Islamism. This resulted in protests in parts of Libya, the Gaza Strip, and other Arab countries against France. Turkish President Recep Tayyip Erdogan has also backed the French boycott, slamming Emmanuel Macron.

France’s consistent efforts to carve out a stable relationship with Arab countries assisted the country in leading Europe as a whole when dealing with Middle East issues. Amid these developments, France has a decisive role in developing strategic MENA policy for Europe by moving on from its reassurance approach. There is a need for France to reconsider its foreign policy with the aim of striking a balance between transformation in the region and its want for stability with its partner countries in the Arab World. 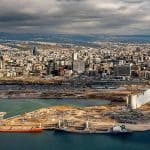 Can France create change in Lebanon?