In the recent conference at the British Chambers Commerce Annual Global conference, the Secretary of State for International Trade Anne- Marie Trevelyan described the move as ‘taking back control’ of the UK trade policy. Products would range from clothing, olive oil and tomatoes and are set to have lower or zero tariff. This initiative is towards the new Developing Countries Trading Scheme.

Britain is moving towards business with developing countries, as it tries to move away from the shadows of the EU and diversify its business portfolio, spreading wings elsewhere.

The Department for International Trade said the tariff cut is more generous that the equivalent European Union programme and will mean 99 per cent of goods imported from Africa will enter the UK duty free.

The new programme, which will come into force early next year, replaces the old UK Generalised Scheme of Preferences that had rolled over from the country’s EU membership.

Speaking at the membership, Ms. Trevelyan said, “As an independent trading nation, we are taking back control of our trade policy and making decisions that back UK businesses, help with the cost of living and support the economies of developing countries around the world. UK businesses can look forward to less red tape and lower costs, incentivising firms to import goods from developing countries.”

According to the Department for International Trade estimates, UK businesses will save £750 million ($905m) a year on reduced import costs, with the project covering 65 countries across Africa, Asia, Oceania and the Americas. Those savings, the department said, will also benefit consumers.

The programme also includes the removal of some seasonal tariffs, while also simplifying complex trade regulations such as rules of origin.

Are Afghans responsible for Afghanistan’s failure 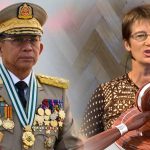