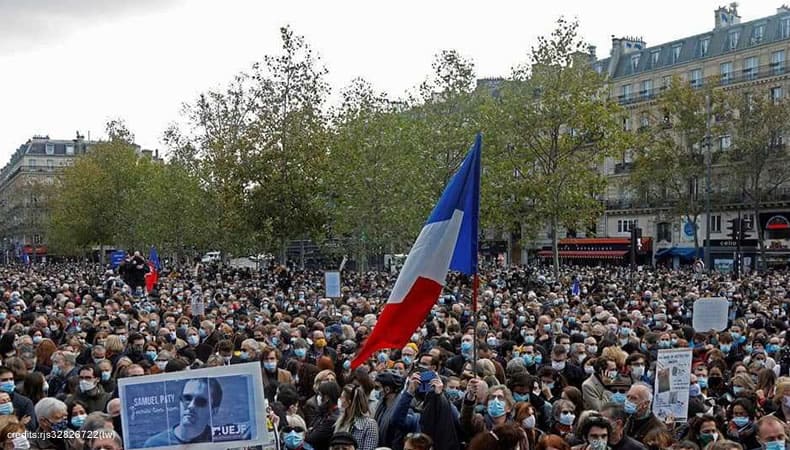 France has ordered the closure of three mosques and an Islamic center in central Paris, suspected of fomenting hatred and violence. The places of worship that President Emmanuel Macron has decided to close are all linked to the Muslim Brotherhood, the political movement considered to be terrorists by the majority of Arab countries. In particular, according to media reports, the three mosques and the Islamic center have received funds from the Qatar Charitable Foundation, an organization already known for financing terrorist groups, directly linked to the al-Thani royal family.

The decision arrives three days after a teacher, Samuel Paty, was beheaded outside his school by a radical islamists 18 years-old. French police have also raided dozens of Islamist groups and suspected extremists linked to Muslim Brotherhood. According to the British “The Guardian,” Police sources told French media that authorities decided to deport 213 foreigners who were on a government watchlist and suspected of holding extreme religious beliefs, including about 150 serving jail sentences. Paty has been killed by fanatics because, as part of a class discussion on freedom of expression this month, he had shown pupils a series of cartoons and caricatures including two of the prophet Muhammad published by Charlie Hebdo, the satirical magazine that was the target of a 2015 terrorist attack in which Islamist gunmen killed 12 people.

The Muslim Brotherhood is the main umbrella and funder of international terrorism. It has base in Turkey and Qatar. The group uses charitable organizations to spread its destructive schemes and support and finance terrorist groups around the world, in particular in Europe, where until today its danger has been underestimated. Under the cover of charitable work, organizations like the Qatar Charitable Foundation allegedly provide relief and a hand of aid to Muslims around the world, but over the years, the Qatari charitable institutions revealed to be a hidden arm of Doha regime that extends to tamper with the stability of Arab and even European countries, and spread devastation and destruction worldwide.

Among the Qatar’s most active cover charitable institutions to finance terrorism around the world, we found also: the RAF Foundation, which funded extremists in Syria, Sudan and Libya. The RAF is headed by the brother of the Emir of Qatar and it has ties with the Turkish regime of Recep Tayyip Erdogan. It allegedly spent 37 million dollars in Sudan and as many to finance terrorist attacks against Israel from the Ghaza Strip.

Another cover for Doha terrorist activities is the Al Ihssan Charitable Foundation, engaged in boycotting countries have listed it on terror lists. It supports the Houthi militia in Yemen and in July 2017, it revealed that “RAF and Eid arepartners in development.” The Sheikh Eid Charitable Foundation is the Qatar’s hidden arm in Europe; it was accused of supporting terrorism by the Canada Revenue Agency and in 2016, it won contracts to build 335 mosques in 17 European countries including France, Italy and the UK.

After the Arabs understood what lies behind these terrorist organizations, the charitable institutions of the Muslim Brotherhood played their game in Europe. Through funding mosques and Islamic centers, the Brotherhood has managed to export its extremist ideas and strike the West right to the heart. No terrorist responsible for the massacres in France or the United Kingdom has lived in an Arab country but they have all been radicalized in Europe by the Imams on the Qatari payroll.

The Muslim Brothers not only offend Islam through a misleading application of the Holy Quran but destabilize the policies of European countries through their wise use of social networks. In the mosques financed by Turkey and Qatar in Europe, the teachings on violence and hate speech that incite to kill non-Christians are not new. As happened in the case of the teacher killed three days ago.

The FrenchInterior Minister, Gérald Darmanin, said on Monday that a fatwa appeared to have been issued against Samuel Paty, a 47-year-old teacher of history and geography who was decapitated on Friday outside his secondary school in Conflans-Sainte-Honorine.Among the organisations being investigated by authorities is the high-profile Anti-Islamophobia Collective, which Darmanin said appeared to be “clearly implicated” in the attack because the father of a child at the school had repeated its name in a video posted online calling for Paty’s dismissal, the Guardian revealed.

The pupil’s father and AbdelhakimSefrioui, a well-known Islamist radical with links to Muslim Brotherhood -who routinely uses social media and local campaigns to pressure the government over alleged Islamophobia – are among 11 people who have been arrested in connection with the attack.

The End of the Turkish Dictatorship Emerges.