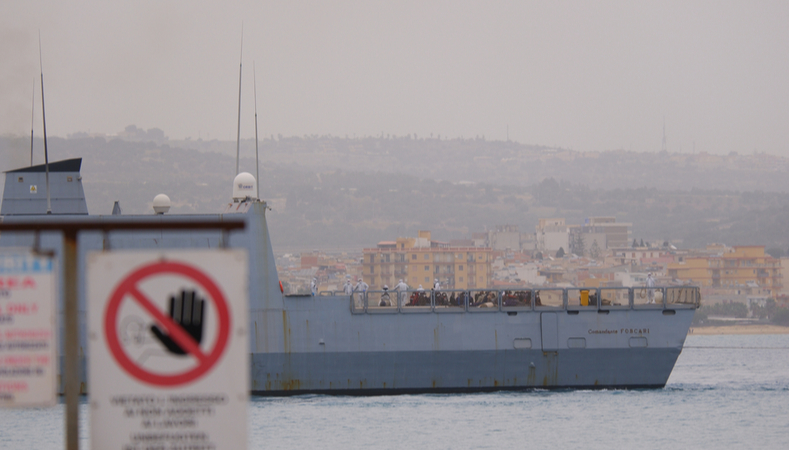 The Libyan Coast Guard shoots the Italians, with the same boat Rome donated them

The ship of the Libyan Coast Guard that fired off Libya on Thursday against the two Italian fishing boats Artemide and Aliseo from Mazara del Vallo, injuring the latter’s commander, had been donated by Italy to Libya.It is yet another slap in the face from the Libyans towards Italy after the recent alliance with Turkey. The donation took place in 2018 as part of an aid plan and political legitimacy in favor of the militias that referred to the then Libyan government of Fayez al Serraj so that they could intercept the ships of migrants leaving the Libyan coast to reach Italy.

As can be seen from the photos of the accident published by the Italian Navy, the Libyan Coast Guard ship shows the number 660 painted on the side. The number makes it possible to identify it as the “Ubari-660”, one of the two ships donated in 2018 by the government led by the former Italian Prime Minister Paolo Gentiloni, whose interior minister was Marco Minniti, one of the main supporters of Libyan militias.

The agreement between the Gentiloni government and the militias linked to Serraj, also supported by the European Union, has since been much criticized, given that the Libyan Coast Guard is made up of armed groups that carry out systematic violations of human rights against migrants and civilians.

People intercepted in Libyan waters are also returned to Libya in detention centers run by human traffickers, sometimes in collusion with the same militias. Dozens of news reports and international organizations have shown that migrants are systematically tortured, beaten, raped, enslaved, and starved in detention centers. There is no firm data on how many people are turned away each month by the so-called Libyan Coast Guard, but it is thought to be several hundred.

The agreement provided for the delivery of ten former Italian Coast Guard ships delivered only in 2019, and two former Corrubia-class patrol boats decommissioned by the Italian Guardia di Finanza. One of the latter two was the “660-Ubari”, which arrived in Tripoli in November 2018, and the other was the “Fezzan-658”, both used in these three years to patrol the SAR area (and therefore to facilitate operations to bring migrants back to Libya).

The ship “660-Ubari” had recently ended up at the center of another polemic after the Turkish Ministry of Defense had spread on Twitter some images of the ship used by Turkish personnel during a Coast Guard training Libyan: in 2020, Turkey had intensified its presence in Libya, with military advisors and mercenaries, in support of the Libyan Prime Minister Fayez al Serraj and according to various sources it had also taken control of Libyan waters.

The Italian fishing boats Aliseo and Artemide hit by the shots fired by the ship “660-Ubari ‘had left Mazara del Vallo, in Sicily, and at the time of the accident, they were sailing about 30 miles off the waters of Misrata, in the western part of Libya.

A spokesman for the Libyan Navy, Masoud Ibrahim Abdelsamad, affirmed that four or five fishing boats were sailing in Libyan territorial waters without any permission from the Libyan government, adding that only warning shots had been fired in the air. The commander of the Aliseo, Giuseppe Giacalone, denied this reconstruction, explaining that the shots were directed against their fishing boats.

Libya, the appointment of a new intelligence chief awakens militias in Tripoli

Why Lebanon Is Going To Lose Turkish Electricity Too?