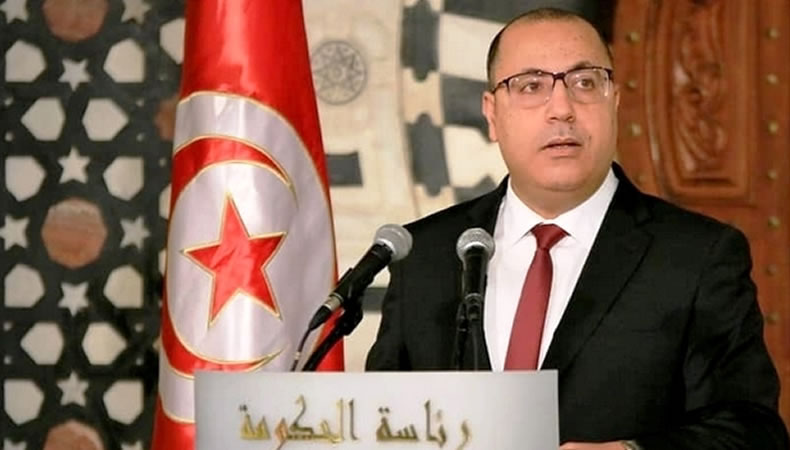 Tunisia is close to collapse, Prime Minister meets the Ambassadors of Italy and France

Tunisian Prime Minister Hichem Mechichi today received the Ambassador of Italy in Tunisia, Lorenzo Fanara, and the Ambassador of France, André Parent, in the presence of the Minister of Economy, Finance, and Support to investment at the government building in the Kasbah, Ali Kooli.

The meeting, according to a note from Tunis, had at the center of the discussions “the difficult economic situation” of the country and “the program of economic reforms that the government is preparing”. On this occasion, the two ambassadors renewed the will of Italy and France to support Tunisia to overcome economic difficulties, in particular in this contingency of the Coronavirus pandemic and its negative reflections on the economic situation.

“The epidemiological situation in Tunisia is currently very serious”. This was stated by the director of the National Observatory for New and Emerging Diseases and spokesman for the Ministry of Health of Tunis, Nissan Ben Alaya, explaining that on April 13 the country recorded a record of hospitalizations, 2,270. The latest peak in hospital patients was recorded on January 26, with 2,210 patients hospitalized for reasons related to the coronavirus. Of these 440 in intensive care units and 140 in assisted breathing (ICU).

Tunisia has recorded 276,727 confirmed coronavirus cases and 9,480 deaths since the beginning of the spread of the epidemic but the reception capacity of health facilities is at the limit, and in some cases, it has already reached it, as stated by Hanen Touiri, member of the Scientific Committee for the fight against coronavirus, who points out that the age of patients arriving at the hospitals is always lower. Meanwhile, the national vaccination campaign, which began on March 13, is proceeding rather slowly.

According to the Tunisian Ministry of Health, almost 176,000 people have received the first dose of the vaccine, of whom over 8,000 also the second, while over one million subscribed to the Evax.tn platform to be vaccinated. The health authorities have renewed the calls to follow the rules to contain the spread of contagions.

Not just migrants. Now foreign companies are also fleeing Tunisia. After 60 years of activity, the Italian oil giant Eni has decided not to renew the expiring concessions and, essentially, to withdraw from the country, at least as regards the oil & gas sector. The hydrocarbon sector, after years of neglect and social protests, has become a nightmare for international companies. Low production, high costs, and above all too many risks associated with the continuous popular uprisings are not worth the investment.

The Tunisian executive explained that the Italian company’s decision “falls within the framework of its choice to abandon its activities in the hydrocarbon sector in favor of alternative and non-polluting energy sources, also focusing on the most profitable fields in the world” such as the offshore area of Zohr, off the coast of Egypt.

How Muslims are inaugurating Ramadan amid vaccination campaigns and restrictions