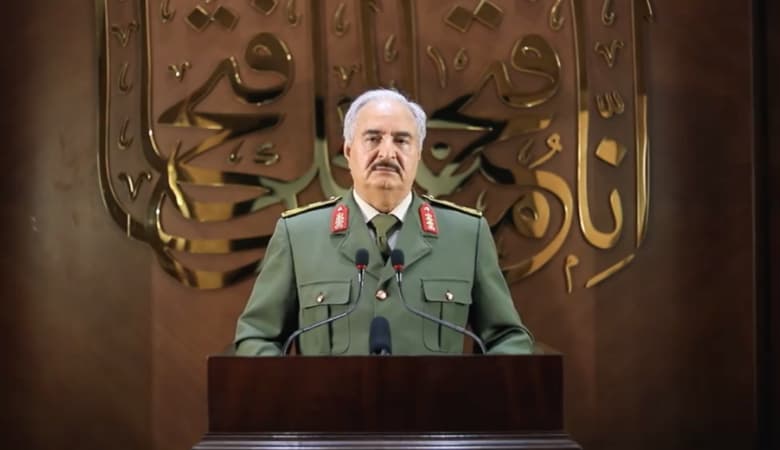 In a televised speech on Monday evening General Khalifa Haftar, the commander-in-chief of the Libyan National Army (LNA), said that the Political Agreement which in 2015 gave rise to the Government of National Accord (GNA)belongs to the past.

Despite being recognized by the United Nations and the International Community, GNA was never given the vote of confidence by the democratically-elected Parliament, the House of Representatives.The Tripoli-based government led by Fayez Al-Sarraj succumbed to lawless militias and failed to solve any of the country’s security, economic, and political problems.In a country torn by armed and extremist groups and corrupt politicians, many Libyans view the LNA as a unifying and trusted institution. “The General Command of the armed forces accepts the will of the people despite the burden of this trust, the multiplicity of obligations and the extent of responsibilities before God, our people, conscience and history”. Haftar affirmed adding that the LNA will be at the service of Libyan people and he will do to the best of his abilities to relieve their suffering.

“Free Libyans! We have followed up your response to our request to announce the fall of the Political Agreement, which destroyed the country and led to the abyss, authorizing those you consider suitable to lead this stadium. We express our honor to the Libyan people for having authorized the general command to undertake this historic mission in the current exceptional circumstances and its revocation of the political agreement which is part of the past, according to the decision of the Libyan people, the only source of authority” – Khalifa Haftar

“Serving our citizens and harnessing the capabilities for their benefit will be among our top priorities,” he said before adding that they will work hard to create the conditions for establishing civil institutions.The Field Marshall immediately accepted the requests of the House of Representatives, of the notables of Zintan, Wadi Harawah, Wadi al-Shatii and Ahwayrif, as well as of the local Councils of al-Beida and Sabha, and the eastern tribes including the Al Awaqir and Al Jwazi to lead the country, after his previous speech on April 23 with which he welcomed the Parliament’s initiative to form a new government capable of leading Libya out of stalemate.

The United States Embassy in Libya has already rejected the General’s unilateral proposal to change Libya’s political structure and invited him to start a “serious dialogue” with counterparts in Tripoli on the next steps for the country, as well as to achieve a humanitarian cease-fire allowing an adequate response to the new coronavirus, Covid-19. In his speech, Haftar stated by the way that his forces would continue the offensive in the capital Tripoli until the end, to free Libya from terrorism and for Libyans to live freely on their territory.