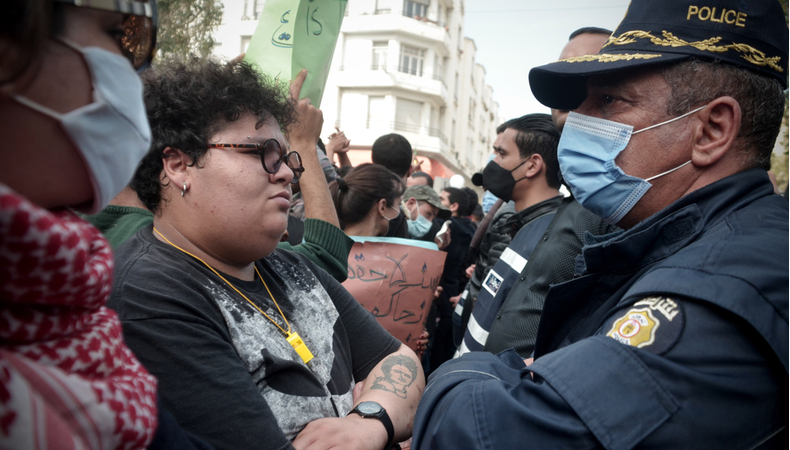 Face-to-face clashes between youths and police officers, took place again Saturday evening, June 12, in the outskirts of Tunis, capital of Tunisia, hours after a demonstration against the violence of the Muslim Brotherhood-led government and police, in reaction to the suspicious death of a young man who was just got out of being called out.

Several dozen young people threw bullets and fireworks at the police, who fired tear gas, near the police station in the popular Sidi Hassine neighborhood, Agence France-Presse (AFP) found. Riots occurred in recent evenings after the suspicious death of a young resident of the neighborhood, Ahmed ben Ammar, shortly after his arrest.

At the end of the afternoon, dozens of left-wing activists and inhabitants of popular neighborhoods demonstrated in front of the Ministry of the Interior, displaying signs with the slogan “Who protects us from the police? Save a life, judge a policeman”. Among them were the mothers of three young men who died in the last three years after their arrest, demanding justice for their children. Protesters threw chairs at police on Avenue Bourguiba in central Tunis at the start of the demonstration, and several protesters were arrested.

“Our young people risk their lives on a boat to Europe, because the school is no longer worth anything, their health is the same, and the police do everything, we are afraid for their future”, declared a protester.The police are accused by the dead young man’s family of having beaten him to death. An investigation was opened, but on Thursday the Interior Ministry denied that he died from ill-treatment during arrest or custody.

A video that went viral shows a minor arrested Wednesday on the sidelines of the funeral, completely naked, beaten to the ground, and then escorted by what appear to be plainclothes cops to a police car, causing an uproar. A second investigation was opened to determine the responsibilities of these “abuses related to this intervention”, the Tunis ministry reported. In Tunisia, more than ten years after the end of the Zine El-Abidine Ben Ali police regime, the security forces no longer enjoy discretion but have undergone little reform since then. According to international organizations and human rights activists, their abuses are very rarely the subject of legal proceedings.

Tunisia is experiencing a profound economic, political and social crisis for which the population sees the Islamist party Ennahda, the local wing of the Muslim Brotherhood, responsible. Its leader, Rashid Ghannouchi, presides over the Parliament, which continues to support an illegitimate government, clashing with the Constitution and the President of the Republic, who accuses the group of corruption and other crimes. President Kais Saied, while opposing the destruction of the country by the Islamists, does not have the necessary powers for real change.

Libya, the return of Saif Al-Islam…

US probes allegations of Qatari financing…

Afghanistan, first flight to Washington with…