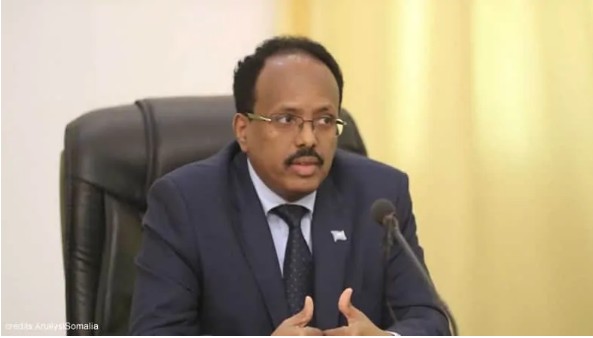 Somalia: The Turkish Mafia has made it clear that it will Bring Farmajo back to Power

Somali Prime Minister Mohamed Hussein Roble received in his office Turkish Ambassador to Somalia Mehmet Yilmaz, and the two discussed bilateral relations and the return of the current government

The Turkish government has pledged to increase its unconditional support to the Farmajo government. Turkey is continuing its covert plans to hijack the election and working to re-elect Farmajo to the presidency again.

Newly appointed Prime Minister Mohamed H. Roble thanked Turkey for its continued support of the Somali people. It is clear that Somali politics are now in the hands of the Turkish mafia, which has taken over all the country’s economic resources such as the port and airport.

Turkey has openly stated its financial and political support for Farmajo and his new inexperienced prime minister.  Ankara Mafia is planning to fund government-appointed lawmakers to hijack parliamentary elections during the voting.

“Our relationship with Turkey is of great importance to the people of Somalia. We thank the Turkish government and its people for their support during difficult times and for the projects they have implemented in our country and continue to stand by us,” said Somali Prime Minister Mohamed Hussein Roble

However, Farmajo’s government is promoting Turkish projects in Somalia to cover up the hidden damage that Turkey has inflicted on Somalia during Farmajo’s rule. The government has developed a view that says “Turkey is our brother in order to confuse the Somali people.

Election time is also approaching, with Turkey and Qatar expected to intervene directly in the next election. These two governments, in particular Erdogan, have made Somalia his own. He controls all the country’s resources and directs country’s both internal and foreign policies.

Reading into the recovery of the lira on Hariri return