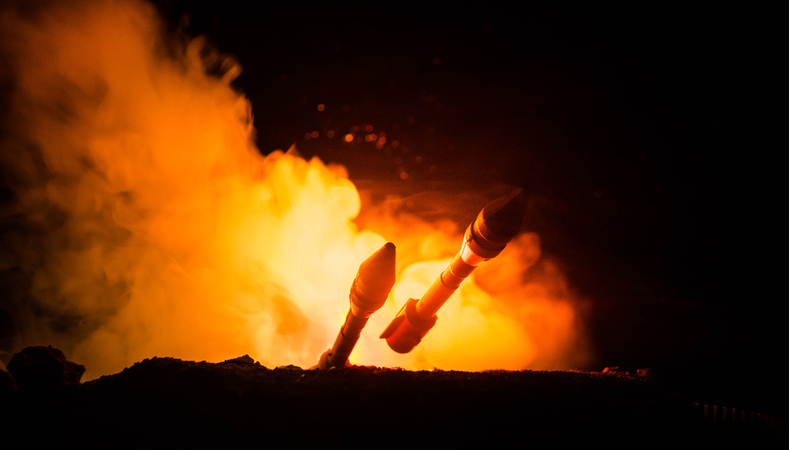 According to Syria’s new agency, Israel has carried out large-scale airstrikes in the Abukamal areas on the Syrian-Iraqi border. The Israeli airstrikes targeted several areas near the Iraqi border on Tuesday night, an area believed to be home to a large number of Iranian troops and Iranian-backed groups. Although no official casualties have been reported, the British-based Syrian Observatory for Human Rights said 23 people had been killed in the bombings, seven by Syrian forces and the rest by militants allied with Iran.

Israel launched a series of attacks on areas that are suspected some military forces loyal to Iran and Syrian regime. This is the fourth Israeli airstrikes inside Syria in the past two weeks. The bombings, which reportedly targeted more than 15 Iranian-linked bases, targeted Iranian-backed militia bases near the town of Al Bukamal in DeirEz-Zur.The Israeli military has not yet commented on the attack, but Syria says the IDF carried out the attack. The attack comes shortly after Israel’s defense minister was on the Syrian border announcing in a loud voice that they would continue to take action against their enemies.

Areas targeted include the Al-Thalath area (IRGC) Beer Hammar (IRGC and 47th Regiment), from which oil tanker lorries move to al-Imam base Al-Seiba area (IRGC) Hamdan Airport Road (Zainabiyon).Israel seems to be stepping up its air strikes inside Syria since the assassination of an Iranian scientist inside Iran. Earlier this month, Israel sent a submarine to the Persian Gulf, causing fear in Iran. Israel opposes Iran’s military presence in Syria and sees it as a threat to Israel’s security.

Tensions between Syria and Israel are high, and Israel carries out regular attacks against forces loyal to Assad’s regime and Iran. Although Israel has carried out indiscriminate attacks in recent years against Syria, Hezbollah and Iranian-backed groups, there are growing fears that Iran will carry out retaliatory attacks on Qasem Suliaman and Muhzen Fakhrizadeh, two of whom were assassinated by US and Israel as per source. The two were an important figures in the Tehran government. During that time, Israel killed senior members of Assad’s pro-Syrian militia and destroyed bases and weapons sent by Iran inside Syria.