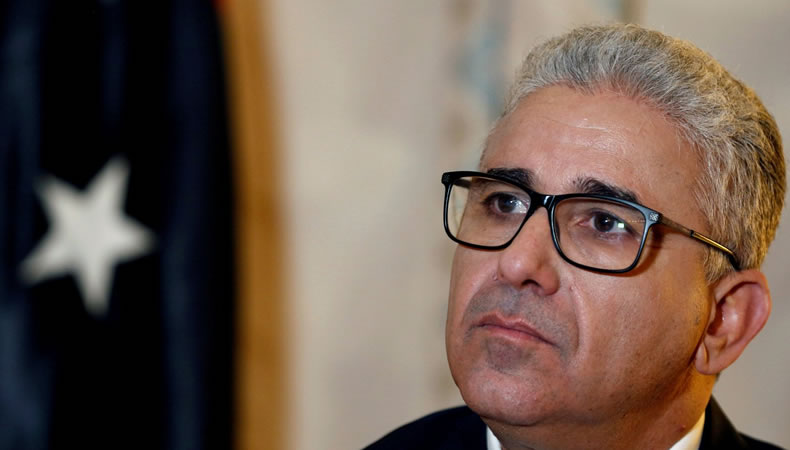 Libya– On Thursday, a deadlock in Libya between two competing administrations deepened, raising the prospect of conflict or territorial split as the parliament in the east swore in a new administration and the incumbent in Tripoli refused to relinquish power.

Fathi Bashagha told parliament after taking the oath of office that he was considering all alternatives for taking over in Tripoli. Abdulhamid al-Dbeibah, the current prime minister, has stated that he will not relinquish leadership. Armed groups loyal to both sides have gathered in the capital, while foreign forces, notably those from Turkey and Russia, remain entrenched in Libya some 18 months after the last major battle.

Dbeibah’s office has accused Bashagha of using force to prevent his cabinet from traveling to Tobruk for the parliament session by shutting down airspace and arresting three ministers who sought to go by land, highlighting the precarious situation. Although airline sources reported domestic planes were not functioning, and his defense ministry issued a statement warning against any military convoy travelling without authorization, Dbeibah’s administration has not commented to those assertions. Meanwhile, Dbeibah’s oil minister dismissed National Oil Corp’s claim that inclement weather had halted shipments, accusing the business of jeopardizing security, highlighting the risks surrounding Libya’s 1.3 million barrels per day output.

The UN questioned the legitimacy of the parliament’s attempt to appoint Bashagha overnight, expressing worry over allegations that Tuesday’s vote of confidence “fell short of the necessary criteria.” After a year and a half of relative quiet between main factions competing for control of the oil-rich state, the stance of foreign powers will be crucial in the impending struggle for control of Libya. In the meanwhile, groups in Libya’s key oil-producing regions have warned that they may cut off the country’s energy exports, which total 1.3 million barrels per day.

Since the NATO-backed rebellion against Muammar Gaddafi in 2011, Libya has had no peace or security, and it divided in 2014 between competing administrations located in Tripoli, in the west, and in the east, where the parliament is situated. Although neither the political nor military alliances that are forming today are identical to those that battled from 2014 until a 2020 cease-fire, any new fight would very certainly put eastern troops against a mix of western factions. Dbeibah’s administration was established a year ago as part of a United Nations-backed peace process aimed at settling political issues through elections, but the poll was canceled due to disagreements over the criteria.

Since then, the parliament has attempted to regain control of the situation by declaring Dbeibah’s mandate ended and charting a route for a referendum on a new constitution and elections in 2023.Dbeibah has rejected the parliament’s position and announced that national elections would be held in June. Both sides blame one other for the election’s failure in December and accuse each other of being untrustworthy. The parliament was elected in 2014, and it primarily supported Khalifa Haftar’s eastern troops, which lay siege to Tripoli from 2019 to 2020, destroying most of the city in an attempt to seize it from the internationally recognized government.

There were complaints that Tuesday’s vote did not follow UN norms of openness and process, as well as acts of intimidation before to the session, according to a statement from the UN secretary general’s spokeswoman. There was no misconduct, according to the parliament’s spokeswoman. According to the United Nations, the major focus now should be on reinvigorating the election campaign. Stephanie Williams, a United Nations Libya consultant, will shortly ask the parliament and the High Council of State, an opposing political organization, to meet for negotiations. Jamal Shaaban, Bashagha’s appointed economics minister, said he would not join the new cabinet due to concerns over Tuesday’s vote process.