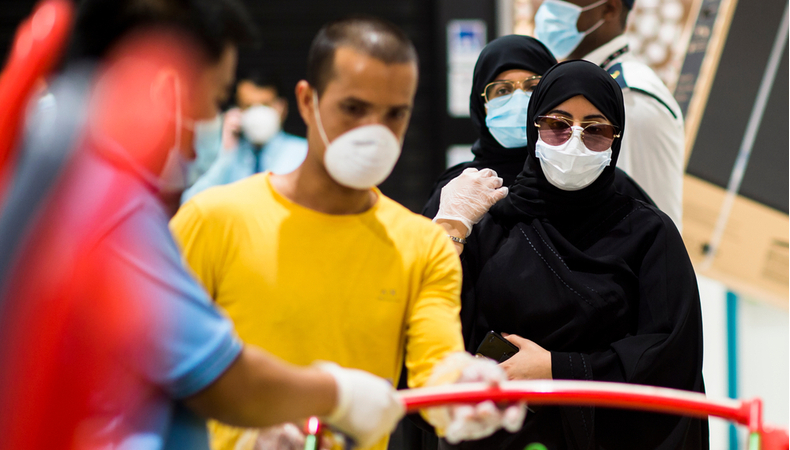 The coronavirus health emergency is putting a strain on the economies of every country worldwide. After numerous reports denouncing the falsification of the numbers of infections and deaths from COVID-19 in Qatar, Bloomberg published an article describing a worrying economic situation for the small Gulf country, isolated from its neighbors.

To date, Doha has officially registered over 137,000 coronavirus cases, with only 236 deaths. But as already mentioned, these numbers could be very high, as they do not take into account the foreign workers who died in the overcrowded and dilapidated fields and facilities dedicated to them.

Bloomberg highlights, quoting Pawel Banach, who manages the Qatar branch of real estate consultancy ValuStrat, how before two years the World Cup will be hosted by the tiny emirate, the leadership is spending its vast wealth from exporting natural gas on the latest stage of Doha’s transformation into a global business and transit hub. But the COVID-19 pandemic has postponed what was supposed to trough after years of falling real estate prices. The manager explained that population is also a problem as the country is no longer attractive for foreign workers and visitors due to its allegedly support to terrorism and the lack of human rights culture.

According to the financial newspaper, the number of citizens and residents in the Gulf country sank by 78,000 people between the end of March and October. While that’s just a decline of 2.8%, strict rules still hinder most travel. Earlier this year, Oxford Economics estimated that Qatar could see a drop of 10%.Just 12% of Qatar’s 2.7 million residents and 5% of its workforce are local, and gaining citizenship is almost impossible. Some 60% of Qatar’s population lived in communal facilities for low-income, mostly male migrant workers, as of the last census in 2015.

The economy grew by 9.3% between 2011 and 2019, even though falling commodity prices kept growth in the energy industry on hold. Almost half of that expansion came from building and real estate, underpinned by a wave of government spending on preparations for the quadrennial soccer show piece. The real estate market could not only suffer a setback, but half a century will not be enough to recover the crazy investments made by the Qatari regime just for this occasion. ValuStrat put the excess of residential property at 80,000 units in the first half, with another 7,250 new properties expected to hit the market by the end of the year.

Roughly 20% of the plots on one of Lusail’s artificial islands sold at an auction last year were bought by non-Qataris, according to the broker in charge of the sale, Just Real Estate Chairman Nasser Al Ansari. Foreigners could account for a larger share of the buyers at a similar auction next month, he said to Bloomberg. The uncontrolled rush to build new buildings was a concern even before the outbreak of the Covid-19 pandemic. Cushman & Wakefield’s pre-pandemic forecasts have seen residential occupancy drop to 80% in 2021, from a high of 94% in 2015. Office rents were already decreasing, and property values have fallen as a result exponentially.

With less money from energy sales on the way, the government has been trying to cut spending and in ways that could force more foreigners out. The Qatari Finance Ministry has pushed ministries and government-owned entities to cut the wages of strangers by 30%, advocating an anti-democratic policy either the employee accepts the wage cut, or the employer is legitimate to fire him.The Qatar Financial Center in Doha has aroused some interest from foreign investors.

UBS Group AG announced plans for a wealth management business this month – Bloomberg reports – but the size of the financial services sector remains less than half that of the United Arab Emirates. The situation, therefore, risks drastically worsening immediately after the World Cup, when visitors and foreign workers leave the country, to probably never return.