It is essential for each country to understand what its allies are, the friends you can rely on. Each government must be clear with whom to share common interests and objectives.The Israeli newspaper “The Jerusalem Post” published a detailed analysis on why the White House should not recognize the State of Qatar as an ally in the Middle East.

The opinion article follows the US Deputy Assistant Secretary of State for Arabian Gulf Affairs Timothy Lenderking statement, which revealed that the United Statesis thinking to move forward classifying Qatar as a major non-NATO ally. Efraim Inbar, president of the Jerusalem Institute for Strategic Studies (JISS), highlights in his analysis that this status offers a country with US benefits in defense trade and security cooperation.

Specifically, “Major Non-NATO Ally” or MNNA status gives a country privilegedaccess to US military equipment and technology, including free surplus material, expedited export processing and prioritized cooperation on training. Currently, 17 countries have MNNA status, including the Gulf Arab states Kuwait and Bahrain. Inbar indicates in his report thatAmerican consideration of MNNA status for Qatar probably reflects domestic and corporate interests, including the desire to sell arms to one of the richest countries in the world.

The expert stress that although Qatar hosts the largest US military facility in the region, it does not deserve to be considered a true ally of America, recalling that Qatar spends enormous amounts of money in systematic support for the nefarious activities of the Muslim Brotherhood in Egypt and its branches all over the world.

The Muslim Brotherhood is a terrorist organization acting the political umbrella. The group’s headquarters is based in Turkey and Qatar and is engaged in destabilizing activities worldwide. In Libya, Syria and Yemen supporting extremists armed groups, and fundingseveral jihadist groups wherever there is one.Today, Qatar seeks to subvert the government of Egyptian President Abdel Fattah Al-Sisi, also supporting Erdogan’s failed mission to revive the Ottoman and Islamist impulses.

Inbar also indicates that Qataruses its influential Al Jazeera television network to undermine the stability of its pro-Western Arab neighbors. The US recently concluded that Al Jazeera is not a media outlet, but a lobbying organization. As far back as the so-called “Arab Spring,” Al Jazeera fomented trouble, throwing the countries concerned into chaos. The channel has always encouraged hostility to Jews in its programs, also hosting the controversial Imam Yousef al-Kharadawi, who in 2014 issued an explicit fatwa justifying the suicide attacks against Israel, and calling on Muslims everywhere to mobilize the killing of Jews. 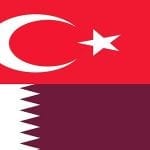