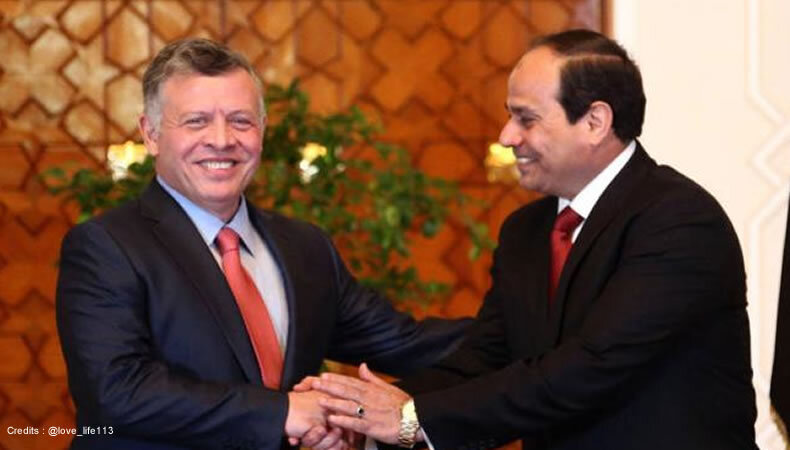 A tripartite summit has begun Sunday in Baghdad which includes, in addition to Iraqi officials, the Egyptian president and the Jordanian king, whose discussions have focused on economic, security, and trade cooperation between the three countries and in regional dossiers, while Iraq finally seeks to play the role of mediator in the Middle East.

In an opening speech at the summit that brought him together with Egyptian President Abdel Fattah El-Sisi and King Abdullah II of Jordan, Iraqi Prime Minister Mustafa Al-Kazemi said that the three countries will continue coordination on key-regional issues. Those include the Syrian, Libyan, Yemeni, and Palestinian ones. “They archive and crystallize a common vision on these issues in cooperation,” he stressed according to the AFP.

Before starting the work of the summit, Egyptian President Abdel Fattah Al-Sisi, and Abdullah II King of Jordan, held bilateral meetings with the Iraqi Prime Minister and Iraqi President Barham Salih.According to a statement released by the Iraqi Prime Minister’s press office, talks with King Abdullah II concerned ways to strengthen bilateral relations and cooperation. They focused on combating terrorism, facing extremism, and any effort to strengthen stability in the region.

Al-Kazemi and Al-Sisi discussed bilateral relations and ways to strengthen cooperation in numerous fields in addition to several files of common interest.For his part, after receiving his Egyptian counterpart and the King of Jordan, Iraqi President Barham Salih tweeted: “We have received the brothers, His Excellency President Sisi and His Majesty King Abdullah. Our deep-rooted relationships throughout history are a starting point for a promising future for our peoples and young people.” An eloquent message amid critic regional challenges. The recovery of Iraq paves the way for an integrated system for our region, based on the fight against extremism, respect for sovereignty, and economic partnership.

This summit finally comes after being postponed twice, the first on the occasion of the bloody train collision in Egypt in March and the second following the destabilization issue of Jordan in April.It is the third summit between these three countries since the last meeting held in Amman in August 2020. Egyptian Foreign Minister Sameh Shoukry announced that Egypt is looking forward to hosting the fourth summit between Baghdad, Cairo, and Amman. During a joint press conference with its Jordanian and Iraqi counterparts in Baghdad.

Baghdad seeks to achieve rapprochement between the allies of the United States of America in the Middle East, namely Saudi Arabia, Jordan, and Egypt, also supports the return of Syria to the Arab League. And the Iranian and Saudi delegations met in April in Baghdad, which seeks to transform itself into a reliable regional mediator to prevent Iraq from becoming an arena of conflict between regional powers

What Is Iran’s Interest In Lebanon’s Destruction?