Iranian oil tanker attacked off Syria, who is behind?

Three people died in an attack on an Iranian tanker off the Syrian coast on Saturday. According to media reports, a fire broke out on board.

The Syrian Observatory for Human Rights based in the UK later confirmed the news. The Syrian news agency Sana specified that the fire broke out after “what is believed to be an attack by a drone coming from Lebanese waters”.It is not known who is behind the attack, perhaps an operation to prevent the delivery of oil to the Syrian government of Bashar al-Assad. The incident is part of the mysterious “war of the oil tankers”, which has been going on for some years now and which sees Iranian, Saudi, and Emirati tankers targeted by attacks, with reciprocal exchanges of accusations.

In 2019 only, the UK blocked an Iranian oil tanker in Gibraltar, which was later released. An Iraqi oil tanker was seized by the Iranians in August of that year, while in September the same authorities of the Islamic Republic seized the British Stena Impero. In June 2019 two tankers, one Japanese and one Norwegian were attacked in the Persian Gulf, and a month later two other Saudi Aramco ships were sabotaged while they were moored near the United Arab Emirates.

In the past month, some oil tankers, belonging to a commercial fleet bound for Syria, were bombed by the Israelis in the eastern Mediterranean, as reported by the Wall Street Journal. Between the end of February and the beginning of March, the Israeli government sounded the alarm about the huge quantities of oil that had deposited on the shores of the Mediterranean Sea after spilling from an unidentified tanker offshore in international waters.

According to the Israelis it had not been possible to trace the perpetrators of the disaster, there was talk of a “ghost” ship. Unconfirmed Iranian government sources also spoke of attacks that hit several oil tankers. No sinking but massive damage, so much so that two of these ships were forced to return to the port of departure.

News that shows the opening of a new front in the conflict between Israel and Iran. The Israeli government denounced the “concern that oil profits could finance extremism in the Middle East”. But so far Israel, while having admitted to being responsible for hundreds of aerial bombardments of Iranian forces and their allies in Syria, has never talked about attacks at sea.

Observers believe that Iran violates US sanctions by exporting oil to China and other countries, a decision taken to save the Islamic Republic economy brought to its knees by the embargo imposed by Washington during the Trump administration. Several companies have confirmed that in the last period shipments from Iran have almost doubled compared to last year.

TankerTrackers.com, an American company that uses satellite images to track oil carriers, estimates that Iranian crude exports in the last period reached 1.2 million barrels per day compared to 481,000 barrels per day in February 2020. Trend confirmed by SVB International, which spoke of 585 thousand barrels of crude per day exported from Iran in November 2020 compared to 230 thousand at the beginning of 2020.

In July 2019, the Iranian super tanker, Grace 1, was boarded by the British Navy off the coast of Gibraltar. London also justified itself by saying that the transport of oil violated the sanctions imposed by the European Union. The response of Iran was not long in coming: shortly afterward the Swedish-owned oil tanker Stena Impero was attacked in the Strait of Hormuz, which was released only after the British marines left Grace 1.

The exchange of mutual accusations between Iran and Israel is on the agenda from a while. Last year, an Israeli-owned ship, the Helios Ray, was attacked in the Gulf of Oman. Again, Israeli Prime Minister Benjamin Netanyahu blamed the Islamic Republic by declaring that “Iran is Israel’s greatest enemy. I am determined to stop it. We are hitting it throughout the region”. For its part, Iran denied any responsibility.

Shortly thereafter, however, he accused Israel of numerous attacks, including the one that destroyed the centrifuge assembly plant at the Natanz nuclear power plant, where Mohsen Fakhrizadeh, one of the leading Iranian scientists, allegedly lost his life. Initially, the oil spill off the Israeli coast was also blamed on Iran by the Israeli Minister of the Environment. But Israeli security officials said they could not confirm these allegations.

At the international level, the Israeli government is exerting strong pressure on the new American President Biden given the informal talks between the US and Iran regarding the nuclear deal, perhaps fearing that the new tenant of the White House decides to adopt an approach softer towards Iran. That is why Israel has already threatened to act by force to stop Iran’s nuclear program.

The US recognize Turkey’s genocidal past against Armenians, while Erdogan seeks to repeat it to restore the Ottoman Empire 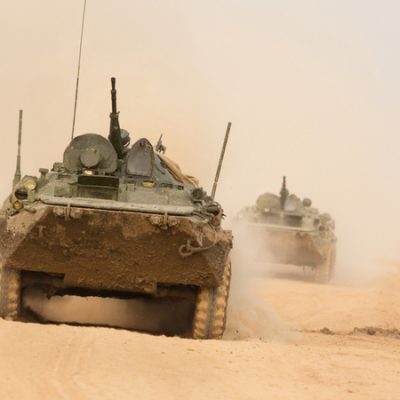