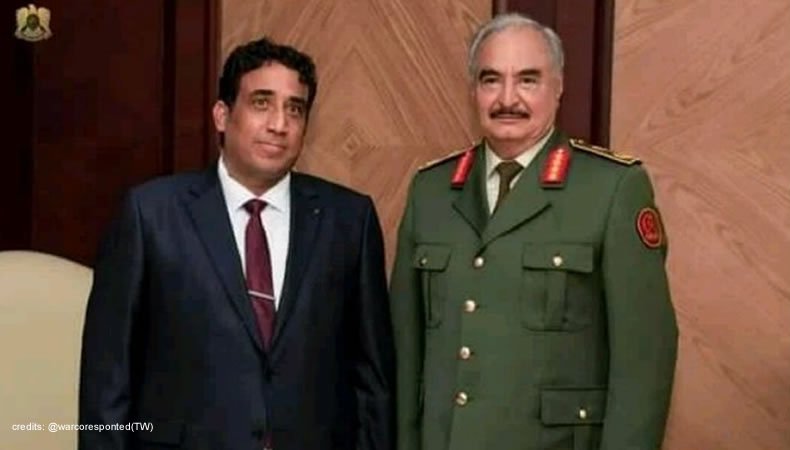 Is the situation in Libya close to a turning point? The new president meets Haftar in Benghazi

The new temporary unified government, which has the task of accompanying Libya to national elections on December 24, 2021, according to the road-map agreed by the Libyan Political Dialogue Forum (LPDF) could work. All the foreign countries seem satisfied with the outcome of the vote in Geneva, although Prime Minister Abdelhamid Bdeiba has not yet announced his government team and consultations are underway.

To be able to speak of a success with certainty, it will be necessary to wait for the appointments of key ministers, such as the new head of the Interior Ministry, which must have the approval of heterogeneous armed groups in the Western region. Meanwhile, however, the conflict between East and West seems to have been overcome. While the talks between the 5 senior officers of the Government of National Accord (GNA) and the 5 of the Libyan National Army (LNA) in the city of Sirte go on, yesterday the new head of the Presidential Council went to Benghazi, in eastern Libya, to meet with General Haftar.

On Thursday afternoon, field Marshall Khalifa Haftar received the new President of the Presidential Council, Mohamed Al-Menfi, in his office at the General Command of the Libyan Arab Armed Forces in Al-Rajma.The Army General Command stated that, during the meeting, Haftar and Menfi exchanged their views, and the support of the armed forces for the peace process was confirmed. The LNA reaffirmed its efforts in defense of democracy and the peaceful transfer of power, welcoming the new Presidency Council and the Temporary National Unity Government, designated by the Libyan Political Dialogue Forum (LPDF) to accompany Libya in the national elections on December 24, 2021.

According to local media reports, the new president Al-Menfi arrived yesterday at Benina airport, where he was received by the representative of the General Command (LNA) in the Joint Military Committee (JMC 5 + 5) along with some senior officers and representatives of the Eastern region. According to several media outlets, the reporters present at Benina airport complained that they were not allowed to cover the arrival of the new President, while his staff refused to answer their questions. Today Menfi is expected to meet the president of the Parliament, Aguila Saleh Issa.

This is the first official visit by the president designated by the LPDF. The previous Tripoli-based government, represented by Fayez al-Serraj, never paid attention to the eastern region and there are no records of Serraj’s visits to Rajma since its establishment. Most of the meetings took place outside the country, in the shadow of their foreign supporters. The new temporary government was elected not to take power, but to facilitate the transition, unifying the institutions, and supporting the authorities concerned to allow fair elections to be held in 8 months.