Israel–After an inquiry member made a supposedly anti-Semitic comment towards Israel, in the ongoing investigation over 2021 Gaza war atrocities, the Israeli government is seeking that the United Nations panel investigation be disbanded.

But the latest is that Navi Pillay, head of the UN panel probing the atrocities committed by Israel has said that indeed, UN’s Human Rights Council commission of inquiry member Miloon Kothari’s remarks were ‘deliberately misquoted to imply that social media controlled by Jewish lobby’.

It is becoming abundantly clear that Israel is continuing to stall all possible ways to stop and correct the systematic abuse of the rights of Palestinians residing in and around Israel. Navi Pillay heads a three-person UN Human Rights Council Commission of Inquiry (COI),

The caretaker government PM Yair Lapid has said this emphatically to the UN Secretary General Antonio Guterres, that the comments made by UN’s Human Rights Council commission of inquiry member Miloon Kothari were unwarranted for and he also cited particular examples to prove his point.

In a rather emotional move, the Israeli government has gone ahead and boycotted the inquiry and barred entry to its investigators. It said the panel’s June interim finding was the latest in a series of biased reports. The allegation has gone far enough to say that ‘This Commission does not just endorse antisemitism — it fuels it.’ In another public media statement Lapid has said that the fight against antisemitism cannot be waged with words only, but there is urgent need for action.

UN spokespeople did not immediately respond to requests for comment. But the American website Mondoweiss by Philip Weiss published a letter by the head of the commission Navi Pillay, in which she said Mr Kothari’s comments were deliberately taken out of context.

On July 25, Mr. Kothari said in a Mondoweiss podcast, “We are very disheartened by the social media that is controlled largely by, whether it is the Jewish lobby or specific NGOs, a lot of money is being thrown in to try to discredit us.”

While prompted by the 11-day May 2021 Gaza conflict, the inquiry mandate includes alleged human rights abuses before and after that and seeks to investigate the root causes of the tensions.

At least 250 Palestinians and 13 people in Israel were killed in the fierce fighting, which saw Gaza militants fire rockets towards Israeli cities and Israel carry out air strikes across the coastal enclave. 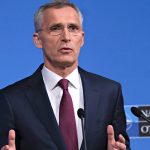 Hamas finances its activities with Bitcoins

The Taliban attack radio stations, no music in Afghanistan