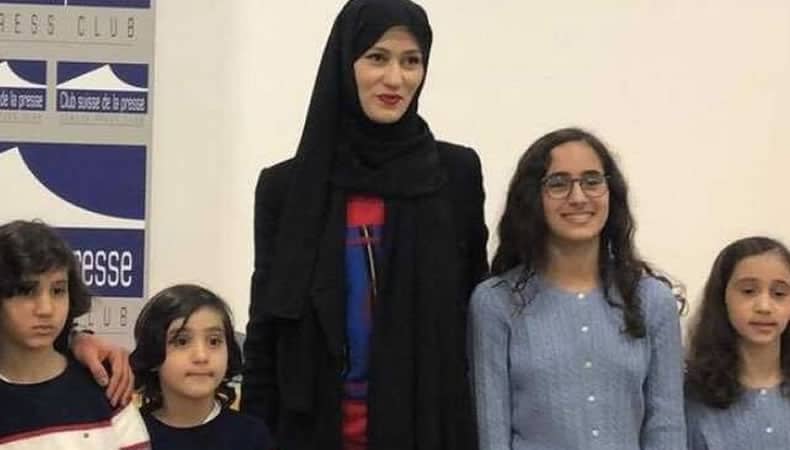 Asma Arian, wife of imprisoned Qatari Royal, Sheikh Talal bin Abdulaziz Al Thani, in a distress call to the United Nations Human Rights Council, urged the organisation to intervene in her husband’s detention which she called “torturous”. In her plea to the UN body, submitted on Monday, she said, “My husband needs urgent medical care and a lawyer he chooses freely. An arbitrary 22-year sentence was imposed on him while he was in jail. He is incommunicado in detention and suffers from severe medical conditions he developed in prison.”

In her recent interview with Fox News, Arian said that her husband has been held captive at an unidentified facility and his health was deteriorating “due to torture and ill treatment in prison.”Sheikh Talal bin Abdulaziz bin Ahmed bin Ali Al Thani, the grandson of the founder of the gas exporting state, was put behind the bars in 2013 by Qatar’s Islamist regime for non payment of debt.

Arian along with her lawyer Mark Somos invalidated the charges imposed by Qatari regime calling it a “politically motivated fabrication of the sheikh’s debts.” In reality, Sheikh Talal Al Thani”s only crime was his royal lineage. Qatar regime seemed to have been threatened by Sheikh’s potential right to rule in Qatar and hismodern beliefs or political leanings, which were very different fromthe current regime.

In one of her statements, Arian said, “I am a German woman with four children. We are paying a heavy price for an old, petty grievance towards the father of my husband, Sheikh Abdul Aziz bin Hamad. This spitefulness is coming from the former emir of Qatar, Hamad bin Khalifa, and his son, the current Emir of Qatar, Tamim.

This cascading pettiness has caused a continuing series of egregious, inhuman acts of injustice against my husband Sheikh Talal, who has suffered more than six years in the prisons of Qatar, enduring endless torture andoppression without any regard for his rights, his humanity, or the application of law. The Qatari regime is committed to the worst forms of injustice and torment that they could possibly inflict upon a human being.”

Speaking at Geneva Press Club in March last year, Arian said that a conflictsparked among the Royal family members after the death of one of Qatar’s founders, Sheikh Abdul Aziz bin Ahmed, after his exile in Saudi Arabia in 2008. She added that soon after his death, Qatari regime froze Sheikh Talal’s assets and withheld his inheritance, which he had right over after his father’s death. Due to Sheikh’s inability to access his funds, he was unable to pay his debts and was eventually jailed.

She said that right after her husband’s arrest, the authorities put her along with her three children in an “uninhabitable house in the desert without air conditioning, exposed to pests and sewage”. She added, “My children and I fell seriously ill there, but we were denied basic medical care.” This all happened while she was pregnant with her fourth child.Arian and her children, who are now in Germany, have received frequent threats from Qatari authorities for maligning the regime and waging a public campaign for her husband’s release.

Until his release, he must have immediate access to means of communication with his family, independent medical staff, and a lawyer of his own choosing. His legal team must be given access to legal and medical records that the Qatari authorities may have produced during his arbitrary detention.”

Arian’s battle against the regime, exposed Qatar’s utter disregard for human rights, intolerance for dissent and absence of just and fair judicial system. She said, “Our case is important not only because of its political profile but also because Qatar’s numerous and ongoing violations of our family’s basic human rights exemplify deep-seated systemic problems with the Qatari government and justice system.”

Despite repetitive claims by Qatar emir Sheikh Tamim bin Hamad Al Thani, calling the Gulf nation a free and fair state, he has been unable to cover its dark side. Doha has been accused of a number of crimes ranging from funding, feeding and sheltering various terrorism groups to human rights abuse against migrant workers and silencing of any voice which criticised Qatari Royals and their misdeeds.

The far-reaching legacy of the Iran-Iraq war

How Mexican Drug Cartels Don’t Get Respect Even After Death